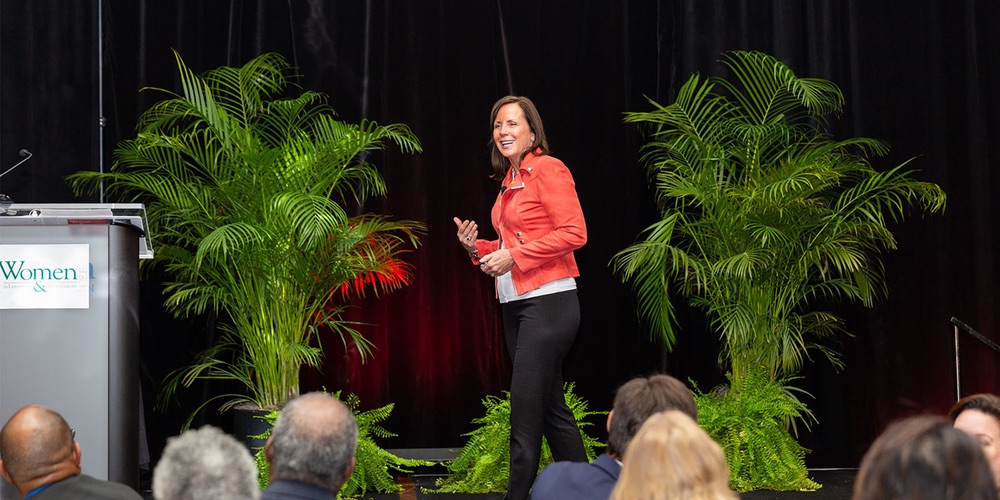 Standing before a crowd of more than 1,000 at the 14th annual Women in Leadership and Philanthropy Fall Symposium, Karlene Williams ’20 described her younger self as introverted, shy and full of self-doubt.

“Because of fear, I almost lost my ambition and my purpose altogether,” said Williams, a senior English education major and second-year WLP scholar.

But none of these traits were on display during her speech at the Oct. 4, 2019, event, as she held the audience in thrall with the details of her journey to become fearless.

And education is significant in Williams’ life as well, empowering her to reach heights she never thought possible.

After finishing high school, her fear and self-doubt almost kept her from pursuing a higher education. But thanks to her grandmother, who had been an educator, she enrolled in community college, where an English professor helped her find her voice through writing.

“I realized I had an ability to communicate and present information in a way that was fearless, bold and different from my normal personality,” she said.

Williams would eventually enroll at USF and become a WLP scholar pursuing a degree in English education. Attending WLP events and interacting with other students from a wide variety of backgrounds and majors helped her to realize she was not alone in her fears.

“No matter how brilliant and accomplished we all are, we all face some sort of challenges. Adversity is no stranger to any of us,” she said.

Williams ended her time at the podium by defending her chosen profession. Instead of referring to teaching as a vocation of last resort, as in “those who can’t do, teach,” she boldly declared, “Teaching is the profession that teaches all professions.”

Impressed, when she took the stage keynote speaker Jean Case — CEO of the Case Foundation, chairman of the National Geographic Society and author of Be Fearless: 5 Principles for a Life of Breakthrough and Purpose — said to Williams, “Maybe I should stop talking about Be Fearless and just send you on the road!”

“While I’m very happy to come and talk about Be Fearless and the five principles outlined in the book, it’s very clear they’re alive and well here at USF,” said Case.

While the book came out in January, Case said the story of the principles began long before. Thanks to her career, first in the technology sector, most notably at AOL, and with the Case Foundation and National Geographic, Case has had the opportunity to travel all over the world.

And everywhere she goes, Case said people have great ideas about how to make things better. But whenever she asks, “How are you going to make this a reality?” she finds the same reaction.

“You spoke about this,” Case said to Williams. “And you probably thought when you have doubts, no one else has doubts. But the truth is people everywhere have that little voice in their head that says, 'It can’t be me.'”

And that was the look she’d get when she’d ask people why they haven’t done anything to make their idea a reality. People would say they felt they needed to have a special genius, or to go to the right school or to be well connected.

She began to ask herself: Are there special characteristics or a “secret sauce” to those who break through with success?

“What was illuminated is that it is ordinary people who do extraordinary things. It's just that they get there by means of applying these five simple, but powerful principles in their journey towards success,” said Case, referring to the five principles she outlines in her book.

During the rest of her talk, she shared these five principles — Make a big bet; Be bold, take risks; Make failure matter; Reach beyond your bubble; Let urgency conquer fear — along with stories of real people who illustrate the principles at work.

But before she began, Case made it clear that being fearless doesn’t mean the absence of fear, but rather that “fearlessness is that ability to look fear in the eye, stare it down and push past it.”

She said the principals don’t have to be applied in a certain order or that one is more important than the others. She does, however, have a favorite: Let urgency conquer fear.

“When we look at our world today, a lot of people are feeling an urgent need to see things change. And that can be a beautiful ingredient to get out there and make change, to push you out of your comfort zone, past fear, to take some actions at a speed you probably wouldn't take,” said Case.

Case called herself a “living example” of the principals. The youngest of four kids raised by a single mom, she said no one looking at her early life would have foreseen the opportunities she’s had.

“Anyone out there, if they have a burning idea about their neighborhood, their community, the world, it’s never too early and it’s never too late,” she said. “You don’t have to wait to have just the right stuff. It’s these principles that will get it done.”

As she wrapped up, Case told attendees they are already making a difference by supporting WLP and challenged them to find ways to take it just one step further.

“Thank you for all you do,” said Case. “I will leave here very inspired and telling the story of the fearless spirit I see alive and all the great things that are going on here.”

Give to WLP Endowed Scholarship

The USF System is home to 50,577 students from over 145 different countries!