/ Impact / Blasting Off for Scholarships

Blasting Off for Scholarships 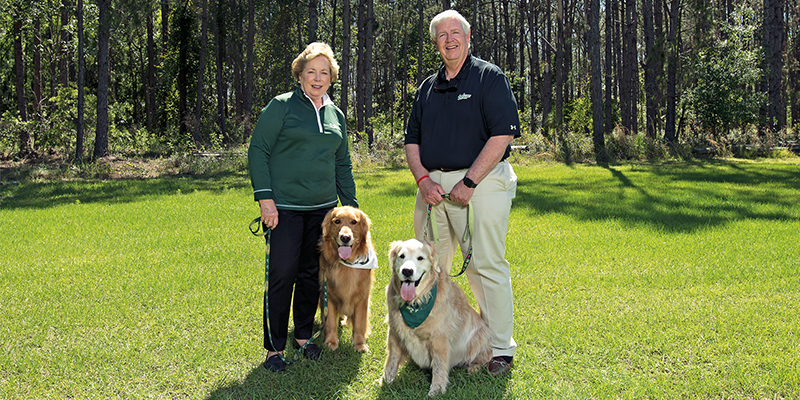 Linda and Randy Simmons aren’t intertwined with the USF legacy so much as cemented into its foundation.

Their company, R. R. Simmons Construction Corporation, literally built the majority of the USF Athletics district from the ground up. Starting with the Lee Roy Selmon Athletics Center in 2004, the Simmons’ firm designed and built the basketball, baseball, softball, soccer, recreation and football facilities and even oversaw the construction of a wing of the Alumni Center.

Their work built upon a family legacy begun by Randy’s father in the late 1950s when R. R. Simmons Construction provided the concrete for the first building on the Tampa campus.

“My kinship was always with USF,” said Randy. “I grew up with it in my backyard. If the university offered the degree I was seeking, I would be an alumnus right now.”

USF represented a family tradition of another kind to Linda.

She was 15 years old when her father died suddenly from heart complications, leaving her stay-at-home mom to provide for three children on her own and with little in the way of savings. Through grit and determination, her mother put herself through school at USF, earning a special education degree in 1971 – the same year Linda graduated from high school.

The next few years were a struggle as mother and daughter attended USF without the benefit of financial aid. Her mother taught at a disabilities center during the day and worked on her master’s degree at night. Linda lived at home, going to school full-time and moonlighting at a credit union to pay for tuition.

“It was a meager existence. There were no frills, but we managed to make it through,” said Linda. “That is one of the reasons our philanthropy has gone towards scholarships today. An awful lot of what we’ve done is because we want to provide to others opportunities we didn’t have.”

Linda graduated in 1975 and began her career in finance. It wasn’t until she moved back to the Temple Terrace area about 20 years ago that she reconnected with her alma mater. A successful professional and business owner, Linda was invited to join the USF Alumni Association Board, which strengthened her involvement with the university.

Over the next two decades, Linda emerged as a driving force within USF - helping found and chair USF Women in Leadership & Philanthropy (WLP), presiding as chair of the USF Foundation board of directors and joining the board of the Gus A. Stavros Center.

The Simmonses became well-known and respected for their community involvement and generous philanthropy. At USF, the couple donated more than $1.7 million to advance areas such as Athletics, WLP, the Gus Stavros Center and the USF Research Foundation - but the bulk of their efforts focused on student scholarships.

“I’ve seen so many men and women stuck in minimum wage jobs with no education, no options and no way out,” Linda said. “Education can be their way out. These are smart, talented people who just didn’t get a leg up or an opportunity to change their circumstances. We want to help people change their lives by gaining an education and taking that step out of poverty. That’s our goal.”

Through WLP, the Simmonses created a deferred gift of $500,000 that will fund the Carolyn A. O’Steen Memorial Scholarship in honor of Linda’s mom. This need-based scholarship is intended for single parents, like her mother, returning to the university to pursue an advanced degree in the special needs field.

They also established the Linda and Randy Simmons Endowed Athletic Scholarship which benefits two student-athletes each year – one male and one female – from any sport.

“Many student-athletes come from limited financial means,” explained Randy. “Athletics is their ticket out of poverty. The true winners aren’t the one percent that manage to have a professional athletic career; it’s the kids who get a degree and change their dynamics. Maybe they are the first person to graduate in their family, and from a world-class university, too. That is life-altering to the legacy of a family.”

“That scholarship meant everything to me. If I didn’t have an Athletics scholarship, I don’t know if I would have gone to college,” said Auggie. “I just want to say thank you to them. They gave a kid that didn’t have the means to get to school an opportunity. They are a big part of why I was at USF and why I was successful.”

In addition to their personal philanthropy, the couple encourage others to engage with USF through their annual Bulls Blast event.

Held at the Tampa Bay Sporting Clays range, Bulls Blast is a half-day fundraiser the Simmonses created and host to grow their athletic scholarship endowment. The first one was held in 2005 with just a handful of teams raising about $10,000. In the 12 years since, Bulls Blast has become a community favorite, capping out at 60 teams. Last year, the sell-out event raised a record $112,050.

But what started as a fun way to introduce business people to the university and to grow their scholarship has evolved into much more.

“Everyone knows USF football and basketball, but they don’t know USF volleyball, sailing or golf teams,” said Randy. “We invite the Athletics staff and coaches to come interact with these business people. We hear all the time people saying, ‘I had no idea! I’m going to take my daughter to a volleyball game.’ It also provides a fun day outing for the coaches and staff. I don’t know too many people that work harder than those in Athletics at USF. It’s not a job for them, it is a lifestyle.”

Linda and Randy Simmons, meanwhile, have turned their love and support of USF into a lifestyle, too – one that is sealed in the very foundation of the school.

Give to Simmons Athletics Scholarship