/ Impact / We Must Lift As We Climb

We Must Lift As We Climb 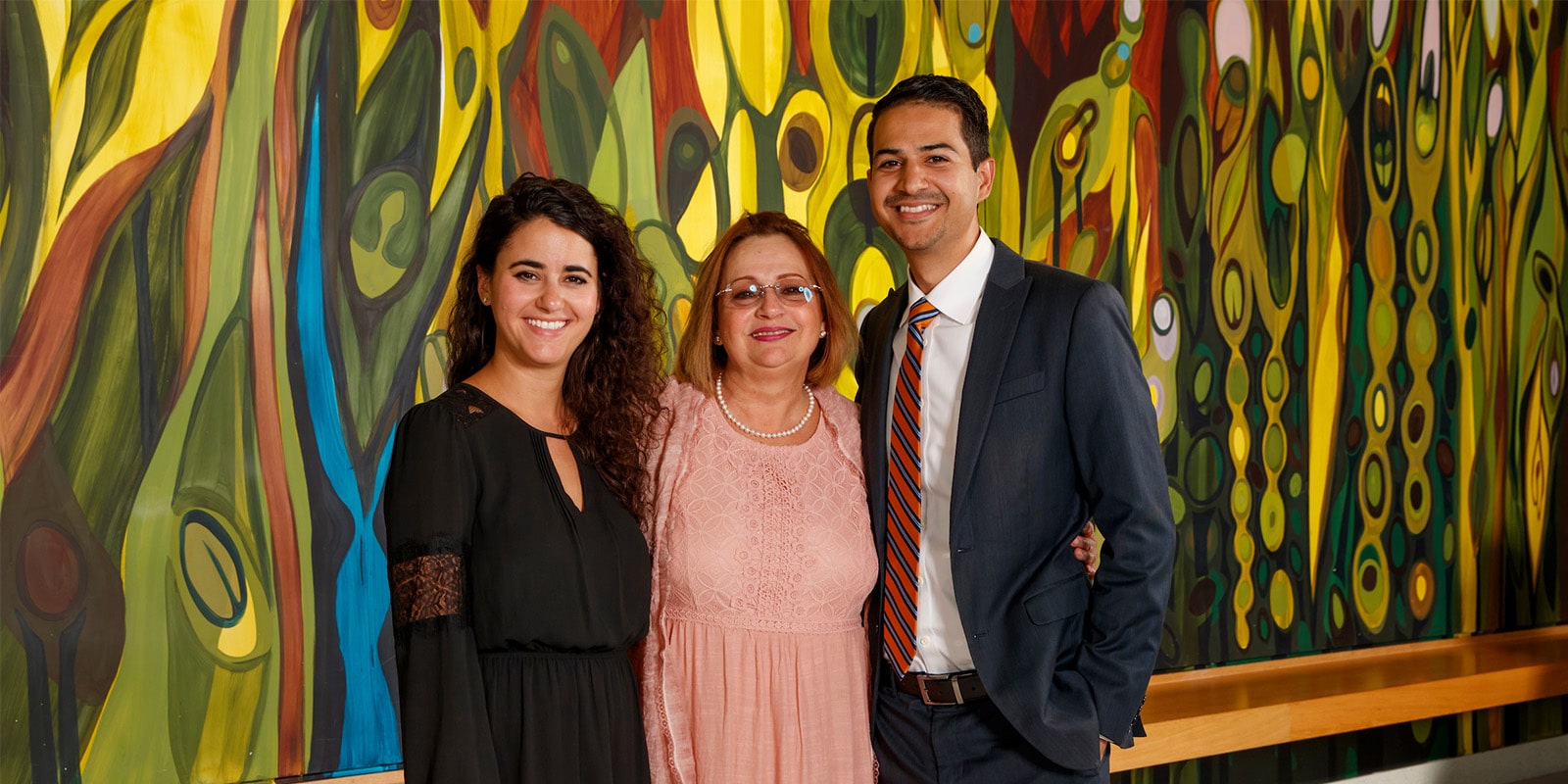 Above: A graduate of the Latino Scholarship Program himself, Jorge Soriano, ’11, and his then-fiancé and now wife, Hilary Wedner, ’17, established an LSP scholarship in honor of his mother, Raquel Fernandez, in 2018.

Once a month last semester, Jorge Soriano stands before students in the Latino Scholarship Program, the Black Leadership Network and USF Women in Leadership & Philanthropy. His mission was to teach financial literacy to students who receive scholarships. But in the bigger picture, Soriano’s goal mirrors the mantra of the Latino Scholarship Program (LSP) that made such a difference in his life as a USF student — the guiding phrase, “We must lift as we climb.”

Soriano’s personal story is like so many built upon the foundation of the 30-year-old Latino Scholarship Program, reflecting perseverance, gratitude and a deep desire to give back to the program that made such a difference in his own life. It is a program supported by so many grateful donors like Soriano, but also by major gifts such as the $1.25 million gift made by Helios Education Foundation in 2008.

In Soriano’s case, the Latino Scholarship Program afforded him an educational lifeline. His mother, Raquel Fernandez, brought him to Florida from Cuba in 1998, after dispatching her older son to live with his father in Puerto Rico to avoid Cuba’s compulsory military draft. Once in the United States, Soriano made the most of his new start, eventually reuniting with his brother and graduating from USF in 2011 as a finance major from the Muma College of Business.

He wanted to find a way to honor his mother for her sacrifices. And that ultimately came in the form of a scholarship established in her name made with his then-fiancé and now wife, Hilary Wedner.

“My mom didn’t have the same opportunities I had, and she sacrificed so much to get us into this country,” Soriano said at the time of the gift. “It was very important for my brother and I to get our education, because she never had that. When Hilary and I told her about naming the scholarship for her, she just broke down crying.”

The LSP has enriched more than 600 scholars over its three decades of impact, and recently the USF Foundation expanded its staff to further support the program. Many, like Soriano, continue to give back. The program’s roots extend back to 1992, when the Latin Community Advisory Committee, led by the late Dr. Braulio Alonso, established LSP to support students from low-income families without the funds to send a child to college. Alonso was joined in creating the program by three women: the late Adela Gonzmart, Dr. Adrienne Garcia, and the late Dr. Remember Maceo-Gomez.

For the record, the program’s first recipient was a Brandon High School valedictorian, Paolo Sequiera, ’96 and MSPH ’98, who faced deportation after graduation. An extension for a student visa was granted, and aided by the inaugural Latino Scholarship, Sequiera enrolled at USF, graduated with honors, and earned both her medical degree and U.S. citizenship. She now practices internal medicine at the University of Southern California Medical Center in Los Angeles, as well as a community clinic serving low-income patients.

Sequiera’s story is just one of many hundreds that reflect the program’s spirit of compassion for those in need of helping hands — and commitment to changing lives. The Columbia Restaurant’s Richard Gonzmart, Adela’s son, understands the power of the program as well as anyone. He established the Adela and Cesar Gonzmart Endowed Memorial Scholarship in 2002, and in 2005, to mark the Columbia’s 100th anniversary, created the Columbia Centenario Award. Those two scholarships total more than $300,000. Then in 2017, came the Richard and Melanie Gonzmart Latino Scholarships totaling another $300,000. The Gonzmart family currently supports 21 USF students.

“My mother stressed to me the need to help students who weren’t so fortunate — students who were academically talented but financially challenged,” he says. “She felt strongly that it was our responsibility to help.”

Among those helped: two siblings, Julio and Elsi Rodriguez, whose father died while picking crops. They graduated USF in 2000 and became successes in technology and finance. Following the lead Gonzmart had set for them years earlier, Julio created the Rodriguez Nambo Endowed Scholarship, honoring their mother, Esther Rodriguez Nambo.

“Before the (Gonzmart) scholarship, I thought my only decision was going to be which crops I would be picking,” says Julio. “At that time, Elsi and I were both working in the fields, and trying to figure out if one of us one might be able to go to college and the other continue in the fields. His generosity allowed us both to go to USF — and that made all the difference in opening doors for me and both my sisters.”

Jose Valiente, ’73, USF Foundation board chair, presided over the 30th anniversary Latino Scholarship Program awards ceremony in September. A 1973 graduate of USF, he has been part of the Latin Community Advisory Committee for 31 years. He and his wife, Lourdes, have also been donors to the program, sponsoring seven students. Valiente and his family made a dramatic exit from Cuba in 1962 just before the Cuban Missile Crisis erupted. Overcoming many hardships, he and cousin Jorge, ’83, were propelled by USF to highly successful financial careers in Tampa.

“Without a doubt, no matter what year, no matter what degree, no matter what field, our students and graduates are making valuable contributions and serving as role models for new generations of students,” Valiente told the celebratory gathering. “They are, in fact, making a difference locally and globally. They represent USF and the Latino Scholarship Program with great pride.”

Give to Latino Scholarship