/ Why Give / Who you Help / Engineering A Legacy 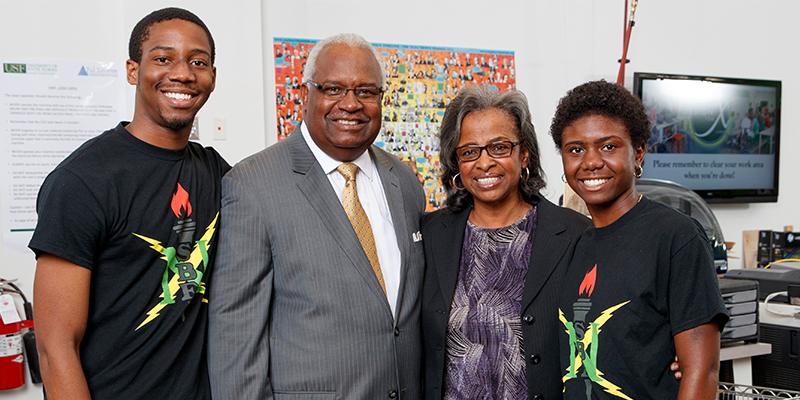 It’s a Thursday evening in Atlanta and Anthony James sits at his desk pondering a question: How do you get affordable and sustainable power to a small, off-the-grid village in Nigeria?

James is contemplating a visit to the West African country to put his expertise into practice once again.

His entire professional life has prepared him for this project. After graduating from USF with an engineering degree, James spent 35 years building an illustrious career in the energy sector – one that began troubleshooting electrical problems at a manufacturing plant and ended when James retired in 2008 as Executive Vice President of Southern Company and President of Shared Services for one of the largest utility companies in the United States.

Yet James says his work is not done.

He is now focused on a multi-tiered effort to establish a lifetime legacy of giving back and inspiring the lives of those he touches to do the same. He wants to improve mankind – at home and abroad – and dedicates his time, expertise and capital to mentor young engineers, improve access to education for minorities and lift up the lives of those less fortunate.

James recalls his own humble beginnings in the changing South during the 1960s. Summers were spent loading watermelons with his father under the hot Florida sun, then later, bagging groceries or digging lab samples for the U.S. Department of Agriculture by day, and washing dishes and mopping floors at a “whites only” restaurant by night.

“I knew one thing for certain,” he says. “I didn’t want to break my back working in the fields for the rest of my life. My mother, an elementary teacher, encouraged me to stay in school and make the most of my education.”

And so he did. James graduated with honors from Winter Haven High School – the first integrated school he ever attended – and started attending Polk Community College, while juggling multiple jobs so that he could stay close to home and help support his family.

By the time he got into the University of South Florida, his heart was set on becoming an electrical engineer – a profession he was exposed to at a young age while working on construction projects with his father, an all-around handyman and apprentice electrician.

With no financial aid, James worked two jobs to pay for school, enduring a brutal schedule that involved long hours and little sleep. His grades suffered as he struggled to balance the scales of work and school.

It was then that he met two men who would ultimately become his mentors, and forever change his life.

One was Bill Packer, James’s roommate, and according to James, the first African American to receive an electrical engineering degree from USF. Packer helped him with his schoolwork, and advised him on the challenges of being a minority in the field and what he would need to do to succeed.

His other mentor at the time was USF career counselor Andrew Minor, who took a special interest in James and helped him land a prestigious internship, a paid co-op position with NASA at the Kennedy Space Center.

For two years, James worked every other quarter at NASA while he finished his engineering degree at USF.

“I worked with many bright people who were doing fascinating engineering research on things like the Doppler radar, laser printers, and mini computers. I was even there during some of the lunar landings in the early seventies,” says James. “Working at NASA made all the difference in the world to me. It was an extraordinary experience that enabled me to see that all things are possible, and it came about because someone took an interest in me and mentored me.”

In 1973, James walked across the stage for commencement, becoming one of the first black men to graduate from the University of South Florida with an engineering degree with a focus in electricity.

Nearly half a century later, he has returned to the university to continue working on his legacy of giving. In addition to serving on the Foundation Board of Directors and mentoring students, James and his wife, Sheila, have created an endowed scholarship at USF to make higher education affordable for minority engineering students.

“I hope this scholarship will accomplish two things,” he says. “I hope it will relieve some of the financial burden from scholars, allowing them to focus on school work and enjoy their time as a student. I also hope the scholars will appreciate the help and decide to help somebody else. You can always give back – whether it is your time, talent or treasure."

Give to the James Scholarship