/ Why Give / Who you Help / A Lasting Rugby Tribute 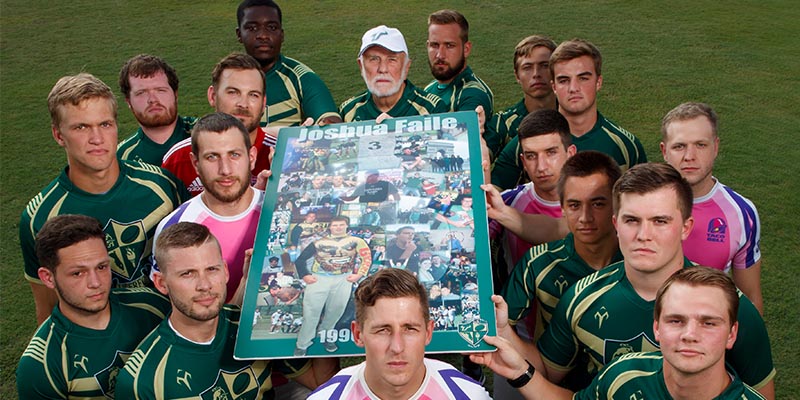 The close friendship that linked Cody Beers and Joshua Faile was forged long before they took the field for USF’s standout Rugby Football Club in 2008. They became pals at age 8 growing up in Leesburg, and attended the same middle and high school in the small Central Florida town. But it was rugby that cemented their special bond – and that forever links them now at USF in spite of a heartbreaking loss.

Faile was one of the team’s stars and leaders and coaxed Beers into joining the squad, which would eventually win the USA Rugby South Championship in both 2009 and 2011. “Growing up together in Leesburg, we always knew we could depend on each other,” Beers says. “We lived together and hung out together. We were like brothers.”

After graduating in 2013, they returned to Leesburg, splitting an apartment and embarking on their careers. Beers, a finance major, found a job handling money matters for an electrical contracting company; Faile, who majored in criminology, registered with a local police academy. But one month before he was to start in February 2014, he died in a tragic accident. Beers was numb. Yet he found comfort in his deep faith and, as time passed, he vowed to honor his friend.

That happened this past year when Beers, now 29, took $25,000 of his savings to fully endow the Joshua Faile Reli-A-BULL Scholarship, which provides financial assistance to members of the rugby club who exemplify his friend’s team-first spirit. “Joshua left a lasting impression on anyone who played alongside him,” says coach Gordon Campbell. The recipient will get $1,000 every spring semester, with $250 extra should that player become the team’s MVP. “I think about Joshua all the time,” Beers says. “I’m just thankful for the opportunity to help his name live on.”

Give to USF Rugby Elite Scholarship