A Vū to the Future 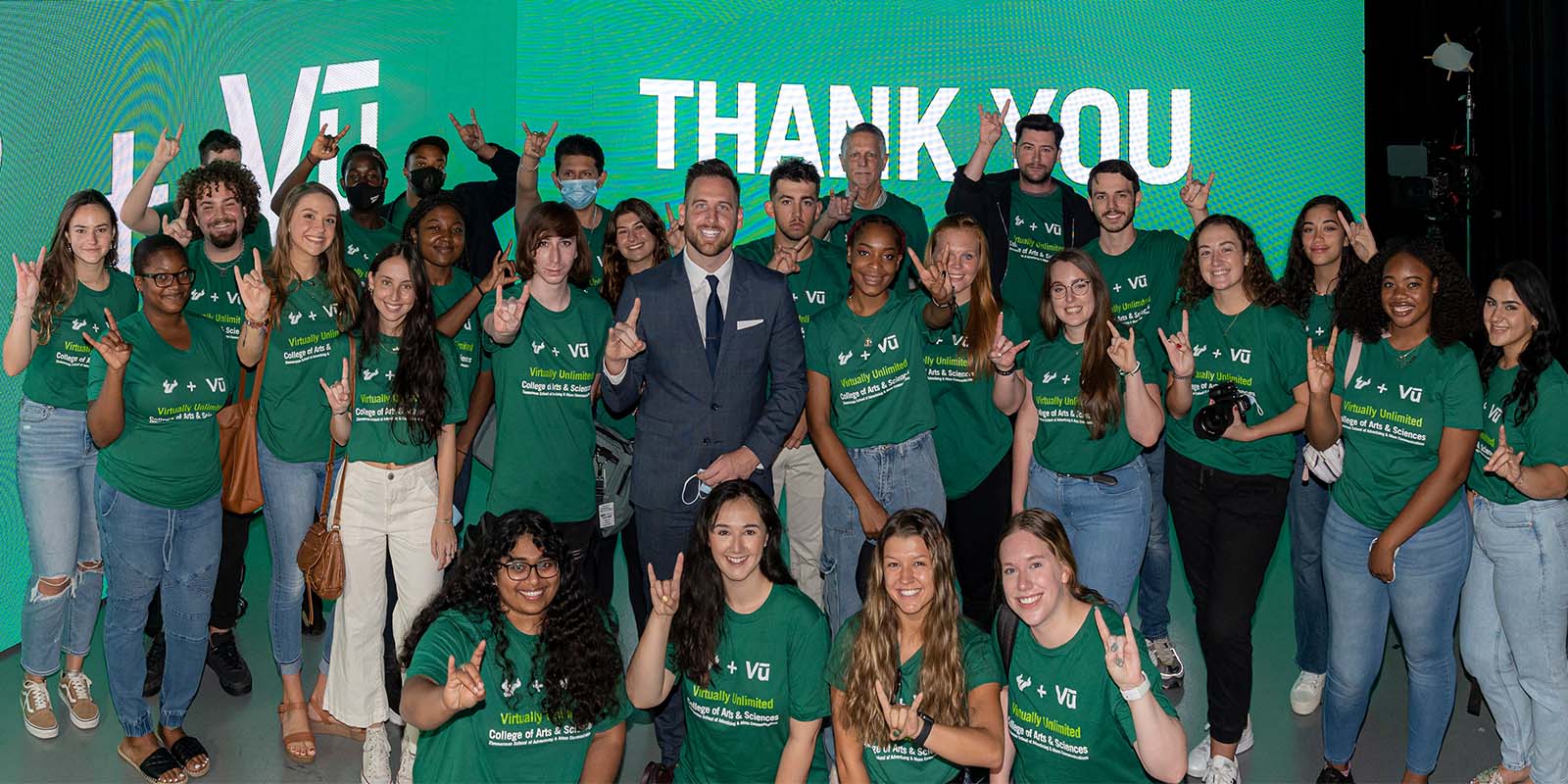 The first few months of 2020 were good for Diamond View Studios, a full-service, Emmy award-winning, creative video agency based in Tampa, Florida. Then the COVID-19 pandemic began.

At the time, 80 percent of their work required travel to film on location, which became a problem in the early days of the pandemic. For about two months, founder and CEO Tim Moore said they struggled with how to solve this issue.

“We figured out, if we can’t go to the location, let’s bring the location to us,” said Moore, a USF alumnus.

They started experimenting with filming against virtual backgrounds, a video production technique that was just starting to gain traction. Virtual production replaces the need for filming on location or against a green screen by using photorealistic virtual environments on large LED domes.

One of their clients at the time, Jack Daniels, was “enamored” with how realistic the backgrounds looked and how much easier it was to shoot this way versus on a green screen.

After successfully working with them and other smaller products, Moore realized they needed to scale up. So in October 2020, Diamond View built a 10,000 square foot virtual production studio along Fowler Avenue near the USF Tampa campus.

“It was a big leap for us, because we essentially rolled the dice with all of the money we had in the business. It was either going to go to the moon or explode along the way,” said Moore.

Fortunately, it was the former.

The newly christened Vū Studios was soon booking clients ranging from Mercedes Benz, Disney and Apple to entertainment artists such as 21 Pilots, Bad Bunny and Enrique Iglesias. NBC’s Today Show did a segment on Vū Studios during Super Bowl weekend in February 2021.

Now 35,000 square feet, Vū Studios stands as its own sister company to Diamond View Studios worth an estimated $50 million.

With their own success in virtual production, Diamond View started looking toward the future.

Moore said the biggest challenge in the industry is creating the workforce, as you can build the studios faster than you can train people to operate them. The technology is also so new, there’s no accredited coursework.

“Virtual production is a major paradigm shift in the video production industry that will create millions of new technology jobs over the next several years,” said Moore.

With more than 60,000 studios worldwide on the brink of this new digital transition, Vū committed to building the workforce of the future by donating $5 million to state universities and colleges over the next three years to build virtual production training programs.

While Vū Studios was being built, Moore already envisioned it as a training ground for video production students at USF and other area universities. The original intent was for students to train at Vū Studios whenever the space wasn’t booked for clients, but with all three studios constantly booked solid for several weeks out, they decided it made more sense to build a dedicated space right on USF’s campus.

In summer 2021, Diamond View Studios made an in-kind contribution of state-of-the-art virtual production technology and camera equipment valued at approximately $500,000 to the Zimmerman School of Advertising & Mass Communications. This gift outfitted the current production studio in the Communication and Information Sciences Building on USF’s Tampa campus with a 40-foot LED wall for virtual production, named Vū Studio in honor of the gift.

Diamond View also made a $39,000 cash gift to support a teaching fellow in the Zimmerman School. Ryan Watson, a full-time instructor in the program, is serving as the inaugural Diamond View Teaching Fellow and will play a pivotal role in designing the curriculum around the new equipment and technology.

“It’s a game changer,” said Watson. “This is the same technology that was used to film Disney’s The Mandalorian, and we’re giving our students access to that before they graduate.”

The gift from Diamond View also spurred the College of Arts and Sciences to update the field equipment for the program.

“Now we’ve got industry-standard equipment in both our field and our studio operations,” said Watson. “Technology is key to gaining a competitive edge, and now we’re in a position where other schools will be trying to catch up to us. That’s a good place to be.”

The gift from Diamond View will help develop a talent pipeline of students and graduates with the expertise and skills needed to support the growing video production and virtual production industry in the Tampa Bay region.

“We see this gift and this affiliation as a tremendous opportunity for USF and Diamond View to be part of building that talent pipeline,” said Zimmerman School Director Kathy Fitzpatrick.

While current students couldn’t have known this upgrade was coming, Fitzpatrick is confident the new equipment and technology will be attractive to future students eager to work in this state-of-the art facility. Faculty will also benefit, keeping their skills current by working with the very latest technology in a dynamic and fast-moving industry.

The upgraded space will allow the Zimmerman School to “dream bigger” in terms of its video production curriculum. Students in video production will be the main beneficiaries, but broadcast news, advertising and public relations students will also get hands-on experience with virtual production.

Broadcast news students, for instance, will have the opportunity to do standups or reporting in front of the LED volume, which is cheaper and more time efficient than doing it on the traditional green screen.

“Ryan and I were joking that maybe the only reason to use a green screen now is to show students the way it used to be,” said Fitzpatrick.

The gift and its impact are in line with Diamond View’s philosophy of “video as a force for good.”

This philosophy “really resonates with what USF is all about,” said Eric Eisenberg, Dean of the College of Arts and Sciences, which houses the Zimmerman School. “We could not ask for a better neighbor and friend than Tim and Diamond View. They truly share our value of transforming students’ lives in a way that better serves our community.”

“We believe the stories we tell today really do shape the world we live in tomorrow, and we want to help the workforce of the future make stories that matter,” said Moore. “We’re really excited to be working with USF and believe there is a bright future for the program.”

Give to Zimmerman School