/ Impact / Unlocking the Door to the Dream of College

Unlocking the Door to the Dream of College 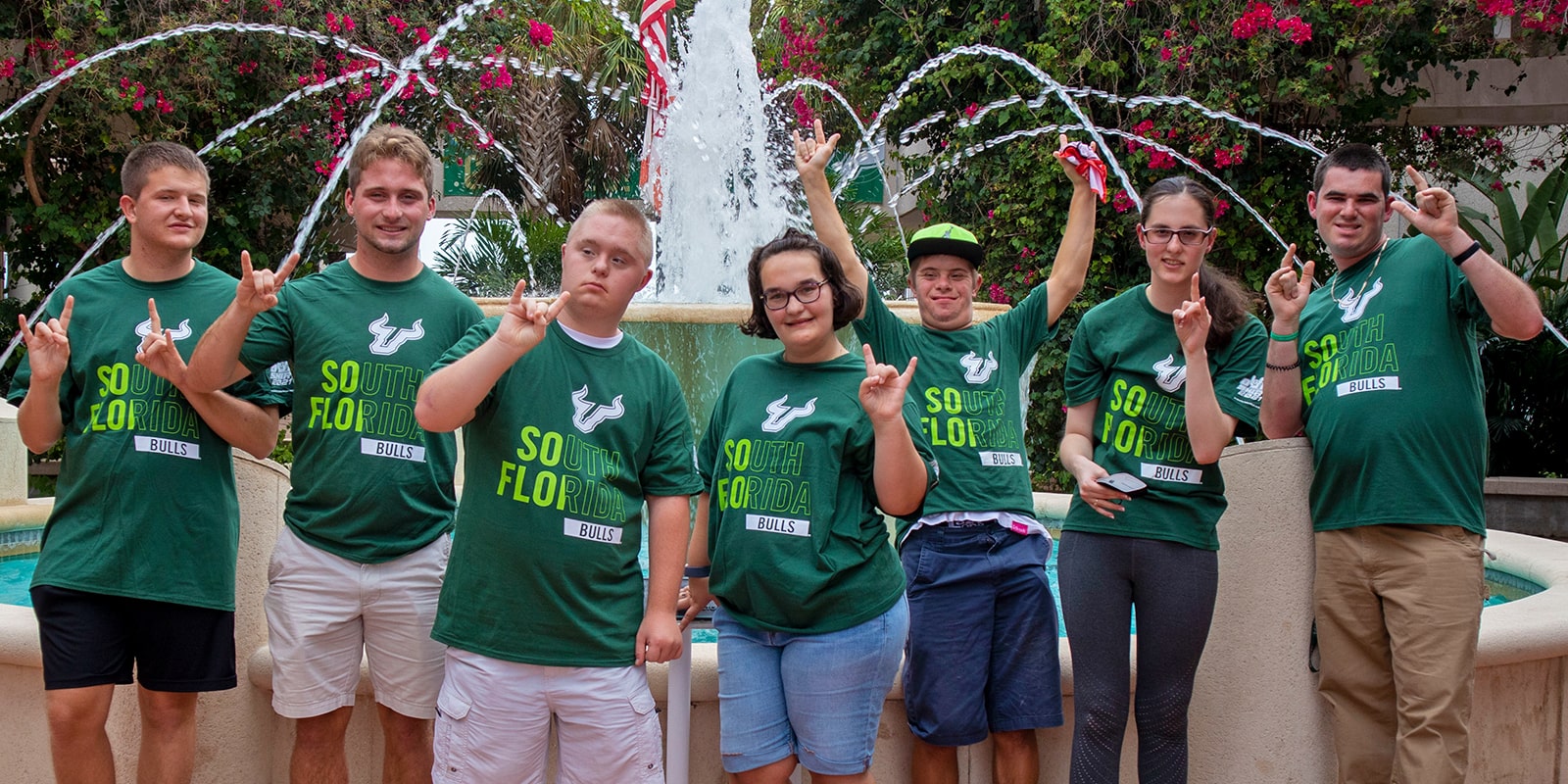 Inside a second-floor classroom, five students from USF’s St. Petersburg campus have gathered for a morning meeting prior to summer session. Another student beams in virtually on a pull-down projector screen, and conversation punctuated by laughter fills the air as they settle in after a fun month at home.

Most have just moved back into their campus residence hall rooms and are talking to program leaders about their upcoming internships — two with the Tampa Bay Rays, one at the St. Petersburg Yacht Club, two assisting in Pinellas County Schools’ Summer Bridge reading program, and another helping to coach sailing in Sarasota.

In one regard, these could be any summer-session students getting down to work on a mostly empty St. Petersburg campus. But they are actually members of the inaugural class, with two semesters already in the books, of an ambitious initiative in the growing, post-secondary field known as inclusive education.

It is a program born from two separate worlds — one springing from the vision and generosity of donors including USF alumni Eileen and Andy Hafer, the other from the determination of USF St. Petersburg campus faculty members — to provide learning, social and career skills for young adults with intellectual disabilities.

This is the story of the Hafers and how those two worlds converged to give students, mostly in their early 20s, the opportunity to experience college and campus life.

In a fledgling program the Hafers fittingly named UMatter, they matter, indeed.

“When these kids graduate from high school, very often there is not a lot waiting for them — after that the world becomes flat and everything simply falls off,” says Eileen, who worked for 20 years as a teacher and exceptional student specialist for Hillsborough County Schools.

The Hafers (pronounced Hay-fers) set out to change that, and their commitment led to a $1.2 million gift through the USF Foundation last September to create the Eileen Hoffman Hafer UMatter Program. Little did they know when they undertook their quest in Tampa that USF professors in St. Petersburg were working on a similar track.

It was just a matter of time before they discovered one another.

The Hafers’ habit of getting involved, and finding to uplift USF, is rooted in their days as undergraduates in the mid-1980s, with Andy literally lifting Eileen on the cheerleading squad. An elementary education major, she had been a SunDoll dancer before switching to cheering. Andy, majoring in engineering, was manager of USF’s basketball team, but noticed what a blast the cheer squad was having. He decided to try out.

“I was the guy with two left feet when I walked in,” he recalls. “I had never thought about doing it before. But back then, they needed males, and any warm body would do. Eileen was the most friendly person in the room, and the first one to come up to me to say hi.”

The rest is Hafer history. They began dating, with Andy also finding time to be a student Ambassador. After graduation in 1988, Eileen went to work as a teacher, returned to USF to work three years in the Alumni Association, then returned to the classroom. Meanwhile, Andy earned a bachelor’s 1988 and an MBA in 1990. He became a tech entrepreneur, helping underserved businesses become more productive.

They married in 1991 and have been looking for ways to make a difference ever since.

“Andy created things with a sense of community,” Eileen said, including his most lucrative innovation, peer-to-peer software training called Dynamic Communities. “And that became our mantra in what we have created together.”

After retiring from teaching a decade ago, Eileen stayed involved in community programs to assist special needs students. Then, some nine years ago, she developed one herself.  She established a volunteer-based program called IMatter. Her vision was to support individuals, about half with special needs, while giving their caregivers a brief respite.

That program had a transformative impact on Andy. When the caregiver of a child with disabilities was unable to attend a special summer camp, Andy filled in. “It changed my life,” he recalls. “That’s when I was hooked.” He pauses, then quips, “And I’ve been on Team Eileen ever since, helping out any way I can.”

Eileen’s vision expanded to the UMatter concept several years ago. She and Andy had several meetings with the then-dean of USF’s College of Education in Tampa, but nothing developed. Unbeknownst to them, two faculty members in St. Petersburg had applied for a grant to create such a program. Then came a breakthrough.

Marion Yongue, Life Member, an associate vice president of development at the USF Foundation, learned of their interest and introduced them to Tracee Norris, former director of development at the College of Education. She, in turn, connected them with Lyman Dukes III, professor of exceptional student education, and Louise “Danie” Roberts-Dahm ’09, MA ’10 and PhD ’17. “The minute we met them,” Eileen says, “we could see our visions for a program were perfectly aligned.”

A top priority for the Hafers was having a residential component for the students. They also found that many similar programs are under the wing of a school’s disabilities office, but they felt strongly it should be housed within the College of Education so it would “own” the program.

“Andy and I also imagined the wonderful opportunities for (education) majors to learn about special needs education,” Eileen says, “not just through research but direct, hands-on interaction.”

The Hafers collaborated with Dukes and Roberts-Dahm, who had secured their state grant of $900,000. They planned to select applicants for the inaugural class in 2020, but the pandemic hit. In August 2021, the St. Petersburg campus welcomed the first UMatter class. One month later came the Hafers’ gift, which will allow the program to expand to USF’s campuses in Tampa and Sarasota-Manatee, as well as fund the Hafer Family Endowed Professorship to provide ongoing support and mentorship.

The program has been thriving, and though Roberts-Dahm has left USF, she has been succeeded by Jayme Joslyn, director of the UMatter program, supported by assistant director Mike Muldoon. On a recent morning, they prepared students for their next steps.

“What are you looking forward to in your internships?” asked Muldoon.

Sam Essman, 23, donning a Tampa Bay Rays jersey, replied that he can’t wait to work at Tropicana Field for a team he has rooted for most of his life. “I’ll be selling food, and when I’m done, I’ll get to watch the games for free,” he said.

Joslyn and Muldoon asked the class if anyone is nervous. “I’m afraid the kids are going to eat me alive,” interjected Summer Bridge intern Logan Lavery, 20, with a big smile.

Joslyn, whom the students call “Dr. J,” reviewed the transportation options to their internships, stressing safety tips for those walking through downtown. They watched a short video about the best ways to study and do online assignments.

The students took one online course this summer while living on campus supported by staff and mentors. During the fall and spring, they take two classes — technically, auditing them — en route to earning a graduation certificate.

Barely a decade ago, students with intellectual disabilities in Florida could earn only a “special diploma” that provided few job opportunities. That changed in 2013 when then-Florida Senate President Andy Gardiner, the father of a special needs son, convened experts around the state, including Dukes, to draft a bill modifying diploma legislation.

The result: a new state statute providing grants for Florida colleges and universities offering programs like UMatter. Today, some 350 such programs exist nationwide among roughly 4,600 colleges and universities. Florida has nearly two dozen, second most in the country. That means in-state students now have a greater choice of post-secondary options after high school, just like any prospective college student.

Many parents were nervous about leaving their children to live independently on a real college campus. Now they marvel at the changes.

Christina McIntosh’s son, Samuel, graduated from Jensen Beach High in 2021. “The only programs we knew of were two to three hours a day for a couple of days a week, and we knew he needed more than that,” she says. “He wanted more, too.”

The county school system provided the parents with a list of potential schools and that’s how they learned of UMatter. She and her husband brought Samuel to campus for a visit, and he immediately fell in love with it.

“We’ve learned a lot about Samuel and even our parenting skills that we would not have seen if he was still home,” she says. “He now walks through St. Petersburg to go to doctor’s appointments on his own. That would never have happened at home. It’s been a huge step of independence. And we’re so grateful to Dr. Joslyn, who is like his campus mom.”

Logan has loved her classes, and even joined a campus dance team. “The people in the group are so nice,” she says. “We did a showcase in the student center. It was so exciting.”

“Logan has grown leaps and bounds from this program,” says her mother, Ann Lavery. “The program has been pivotal in helping her become an independent adult.”

And much of it comes back to the Hafers.

“Eileen and Andy aren’t just fiscal supporters,” Dukes says. “They even help the students move in. They serve on our board. And Andy has helped us develop relationships throughout the business community to provide internship opportunities for our students.”

Andy views that as a vital component: “Parents feel that too often a student will graduate, but not be employable. So we’ve tried to make sure this program did not have a graduate-to-the couch ending to it.”

According to a survey commissioned by the Special Olympics, only 44 percent of adults (age 21 to 64) with intellectual disabilities are in the labor force, compared to 83 percent without such disabilities. The Hafers hope UMatter will help change that, opening doors to the dream of college and ultimately employment for this population of young adults.

“It’s just not right that they don’t have the same opportunities,” Eileen says. “This is a diverse, different group that hasn’t been able to fit in. And we realized we can sit here and do nothing, or we can try to make a difference. And it’s more than our donation. It’s a commitment — our true belief — that everyone on this planet should be included.”