Touching a Family, Enriching a Field 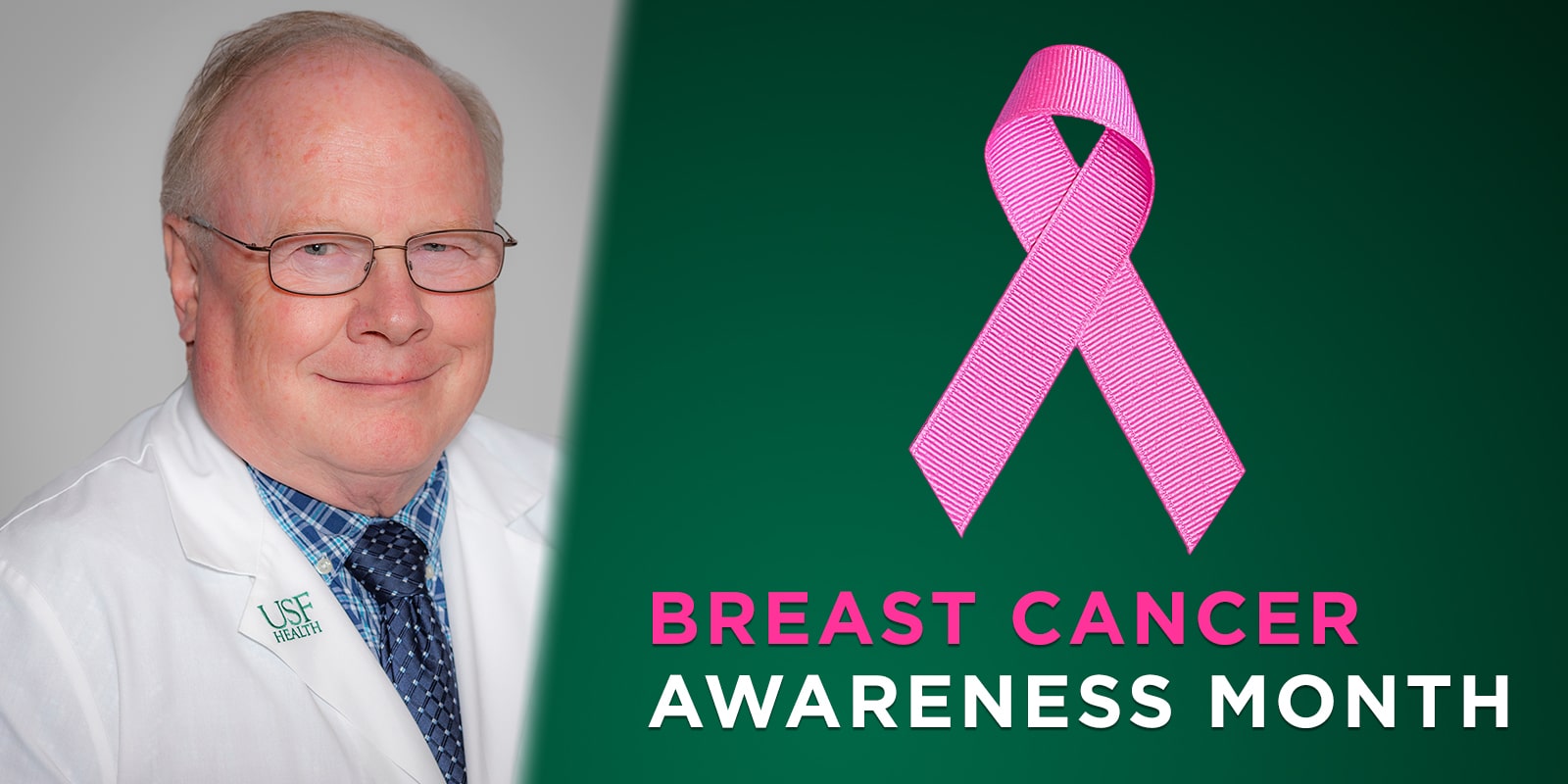 Dr. Charles Cox tells the story with the same down-to-earth charm and infectious laugh that patients, families and colleagues have come to expect from the Joy McCann Culverhouse Chair in Breast Cancer and Chair of Breast Surgical Oncology at USF Health.

Taking a break from his busy schedule on a recent afternoon, Cox is explaining the need to convey empathy and establish trust with patients—something he has been doing at USF for 40 years, earning national and global renown for the breast cancer care that he and his Morsani College of Medicine team provide.

That’s when he recalls the time a new patient told him excitedly that he was the first doctor she’d ever been to with a 100 percent Google rating. He explained humbly that he wasn’t aware of his score, but appreciated her kind words.

“She said, ‘Don’t you ever Google yourself?’ and I said, ‘No, not really,’ but I can tell you how I got that rating,” he recalls with a smile. “It’s because I take care of each of my patients just like they were my family. And now guess what? It’s your turn.”

That approach, coupled with his preeminent stature as an oncology surgeon, has been the bedrock of his success.

It has helped him amass five prestigious Press Ganey awards, a national program for providers who have reached the 95th percentile for patient experience– Cox, by way of comparison, earned 100 percent in 2020. It’s an example of why he once was honored with the Award of Excellence in Teaching & Compassion from Duke University’s School of Medicine, where he did his internship, residency and fellowship, and a Lifetime Achievement Award from the Tampa Bay Business Journal.

And his ability to connect while providing leading-edge care is particularly well known to one Tampa family with deep USF ties—a family, in keeping with his philosophy, that he has made his own.

During Breast Cancer Awareness Month, it’s a fitting time to share this Dr. Cox tale—entwining the woman he successfully treated 27 years ago, her deeply grateful children and her grandson, who today attends the USF Health Morsani College of Medicine, having already spent a year interning on Cox’s staff.

Their story not only shines a light on the top-tier oncology treatment provided by USF Health, but the power of philanthropy in advancing the level of care and how one doctor can make a profound difference in countless lives.

At age 43, Beverly Driggers discovered a lump in her breast through a self-examination in 1995. She had been prone to having fibroid cysts since her 20s but this mass felt different to her. “I told her to please go get it checked,” recollects her daughter, Sherry Longbottom, who had just graduated from nursing school at USF. “I kept pushing her to go and I’m so glad she did.”

Her doctor performed a needle biopsy and, on her 44th birthday, she received a call with the news she dreaded. It was cancer. “My dad called me and he was distraught,” Sherry says. “He thought that was the end.”

Instead, it was the beginning of a journey that would bring Dr. Cox into their lives – permanently. Sherry’s husband, Dr. Ward Longbottom, was by now a “triple Bull,” having earned his undergraduate, graduate and medical degrees from USF. After graduating in 1987, he began a career as a Tampa-based anesthesiologist and knew of Cox’s stellar reputation as a breast cancer surgeon. He made sure that his mother-in-law went to see him for her treatment.

Cox was leading the way with a new technique at the time called Sentinel Lymph Node Mapping, which identifies the first lymph node to which cancer may have spread from a primary tumor. He was able to determine how far her disease had traveled and diagnose her cancer as Stage One. Beverly took no chances, opting for a radical mastectomy and reconstructive surgery. And some 27 years later, she is cancer free and thriving.

“I’m forever grateful for Dr. Cox and for what he has done for me and our family,” she says. “Get your mammogram. It can be life-changing, like it was for me.”

She has seen her grandchildren grow up, graduate from high school and college, and start their careers. And in the case of grandson Brian Longbottom—born two years after her diagnosis and surgery—she has watched with pride while he pursues a medical career, inspired to enter the profession by the doctor who saved her life.

“Knowing about my grandmother’s health situation, and see how she received breast cancer treatment from Dr. Cox, had a big impact on me,” Brian says. “I was able to observe what he could do and what medicine could do. He really turned her life around. She’s doing great and hasn’t had any recurrences. It’s just amazing.”

While pursuing his undergraduate degree at the University of Florida between 2015-19, Brian gravitated to biomedical research. But a shadowing experience exposed him to patient care, where he saw first-hand how research translated to impacting lives. So he changed his career plans to follow the path of the caring doctor he knew of so well.

Brian liked the idea of returning to his hometown in Tampa, and found himself searching for job opportunities at USF. “I stumbled across an opening doing research for Dr. Cox, and it was perfect because I’d be able to work in breast cancer research,” he says. “It was such a great opportunity to work for the man who had made such a difference to my family.”

During this gap year between 2019-20, while immersing himself in research projects for Cox, Brian applied to the Morsani College of Medicine and was accepted. He was thrilled, knowing he would be among family and friends, and continue learning from the surgeon who has become a mentor.

Now entering his third year, Brian credits Cox with his own desire to focus on compassionate care and pursue innovative research. “I want to be how Dr. Cox is in terms of caring for patients,” he says. “Whatever I do, his values are always going to be with me. He’s changed the field of breast cancer, and he’s inspired me to do all I can to help people.”

When you tell Cox how much he means to Beverly and her entire family, his eyes moisten and face becomes flush.

“Well, now I’m going to get all emotional,” he says with a laugh. “But really, I guess it’s why I do what I do. Because it’s gratifying to be able to know that you help so many people and you’re helping in ways they truly need at the time.

“It’s helpful to know that every patient who presents to us with a breast cancer diagnosis is the most anxious patient in all of healthcare – that’s been studied. So when you understand that, the most important and basic thing is to be kind and caring, and if they lash out at you, it’s not you – it’s simply their nerves and anxiety.”

Cox also points to a study he was involved with that examined the impact of the disease on 350 women who had completed their treatment at least five years earlier. The three-part survey underscored the enormous upheaval experienced by patients.  “The answers were profound – 88 percent likened it to losing a child,” he says. “The other 12 percent said it was as bad as losing a spouse or their home. These are all Post-Traumatic Stress Disorder events.”

Prescribing the right anti-anxiety medication is a key step, he says, to allow for rest and recovery from that trauma. “It’s really a very personal disease and one that requires a lot of attention to that side of the coin – their emotional well-being,” he adds. “Getting into that piece of it is the hallmark of doing your job well and establishing a connection. And, of course, I instruct all my staff in the same things. They hear that and see that, and it rubs off on them.”

Cox has been at the forefront of the clinical side of the coin as well – pioneering such innovations as the development of radioactive seed localization, the Savi Scout development to make lumpectomy procedures easier for patients, and Sentinel Lymph Node mapping that he promulgated around the world.

Cox’s work has been supported by late philanthropist Joy McCann Culverhouse, who provided a transformational gift to support him and further his leadership in the field—endowing a professorship in surgical oncology for $1.75 million and a breast cancer endowment for $3 million, among many other awards and grants.

But beyond this critical support, Cox stresses the vital message of women doing self-checks and getting regular mammograms to detect breast cancer early. And he looks forward to discovering new innovations for treatment to combat the disease.

“The other message I convey to people like Brian is to keep your ears to the ground and look for new ways to help people,” he says. “Prepare your mind to look for new treatments. If you’re always thinking about the next best thing to help the patient, then I think you’ll add a lot to your career – and a lot to the lives of those you treat.”

Give to Breast Research and Education