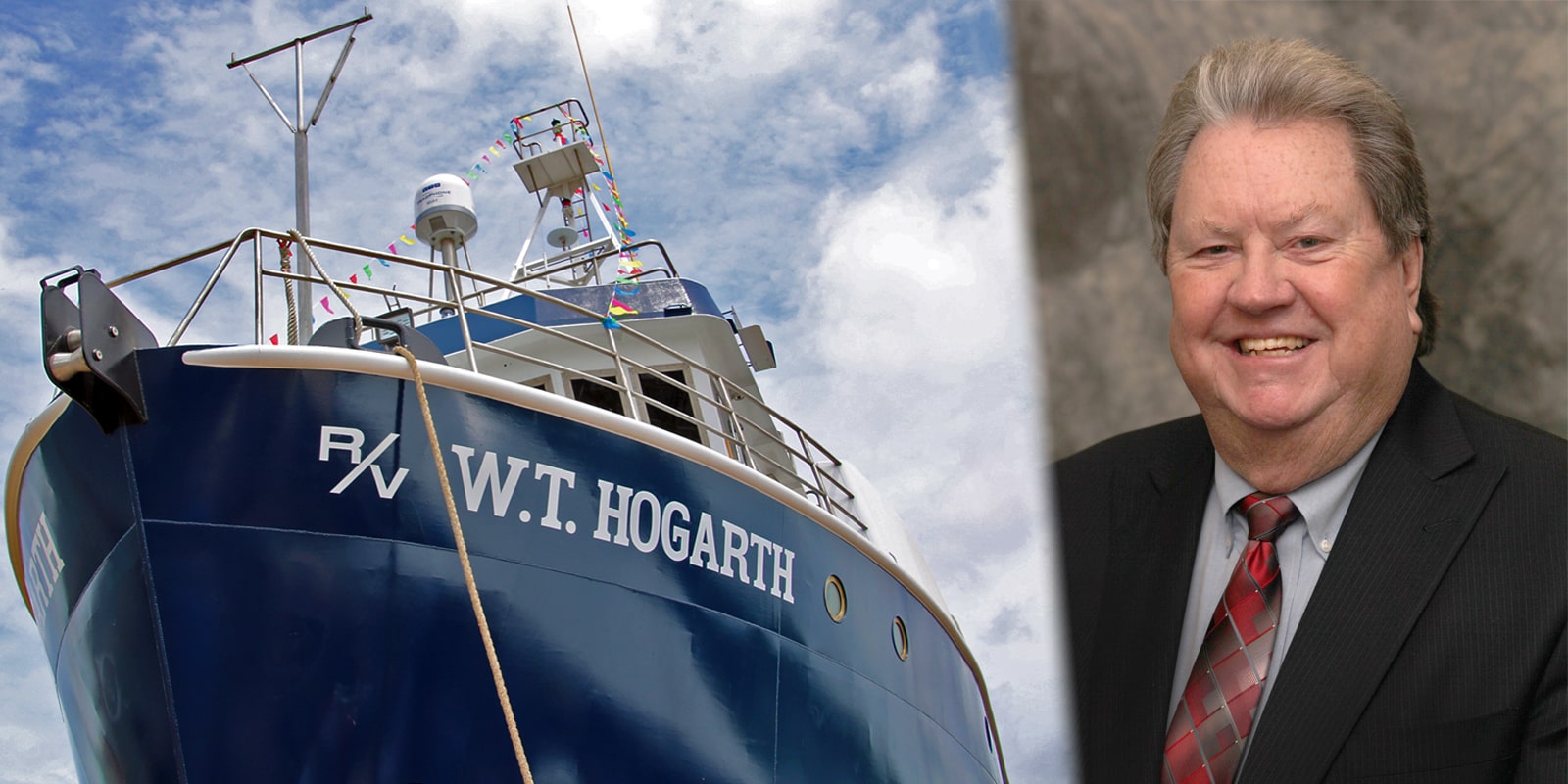 William T. (“Bill”) Hogarth, 83, of Treasure Island, FL passed away after a short illness on November 5, 2022. Bill was born in the small southeastern Virginia town of Jarratt. Raised by his mother and sisters, Bill brought a bit of Jarratt along with him throughout his illustrious career as a scientist and manager of the nation’s fisheries and in later life as an academic. His almost unintelligible southern Virginia accent was often the source of amusement and bewilderment to his friends and acquaintances, once described as the voice of Foghorn Leghorn. But Bill was an amazingly effective communicator with a keen sense of what was politically possible while maintaining empathy for commercial and recreational fishers and their communities as management measures were enacted to eliminate overfishing from our nation’s waters.

Bill worked his way through undergraduate studies at the University of Richmond (B.S.,’63) selling cars and working a myriad of odd jobs. He obtained his M.S. degree in biology from the same institution in 1965. His first professional job was as a research assistant for the state of Maryland working on Chesapeake Bay. He began his Ph.D. program at North Carolina State University in Raleigh in 1966 under the supervision of the legendary Professor William Hassler. Together they studied the populations of striped bass in the mid-Atlantic region, leading to more effective management of this important recreational and commercial species. While at NC State Bill also worked on a project to aquaculture Mahi-mahi and for his degree he researched the life history of Wahoo, a species found in offshore waters throughout the world’s oceans. His studies at NC State ignited a life-long interest in tunas, billfishes and other pelagic species that would play an important part of his later career. Bill also took a hiatus from his NC State studies at the request of the US Army, where he served at Ft. Knox KY. In 1969 he also made time to attend the Woodstock music festival! Bill had an eclectic love of music and especially for Bob Dylan, Lady Gaga and Blake Shelton. Go figure.

In 1972 Hogarth began a 12-year stint as the Environmental Technology Manager at Carolina Power and Light (now Duke Energy) managing studies of the Brunswick nuclear power plant and its effects on local biota. Striped bass was a species of special concern given that spawning occurred in the vicinity of cooling water intakes for the plant. Bill’s expertise with the species was invaluable in efforts to minimize the impacts.

In 1986 James Martin, then Governor of North Carolina, asked Bill to lead the North Carolina Division of Marine Fisheries. There he directed all scientific, management and law enforcement activities related to fisheries in the state and participated in regional and federal collaborations on a number of important species. Most importantly, it was then that Bill met and eventually married his wife, Mary.

When the governor left office Bill stepped down from the directorship and began his long affiliation with the National Marine Fisheries Service (NMFS), part of the National Oceanic and Atmospheric Administration of the US Department of Commerce. During his career at NMFS Bill steadily rose in the ranks from recreational fisheries coordinator, to acting chief of the Highly Migratory Species Division in Silver Spring MD (Washington DC), then on assignment as acting regional administrator in Long Beach CA, and a similar position in St. Petersburg FL, where his association with Tampa Bay began. He returned to Silver Spring as acting Assistant Administrator for Fisheries in 2001. Later that year President George H.W. Bush asked Bill to assume the duties of the Assistant Administrator for Fisheries (Director of NMFS) a position he held until his retirement from federal service in 2007. Hogarth’s accomplishments at NMFS were prodigious. Working with Alaska Senator Ted Stevens, Bill was able to develop and get signed into law revisions to the Magnuson Stevens Fishery Conservation and Management Act, which is the primary fisheries management law in the country. The 2006 revisions put teeth into the nation’s laws to eliminate overfishing, rebuild depleted stocks and manage for resource sustainability. For his accomplishments in driving this legislation Bill and his team were awarded the Department of Commerce Gold Medal.

In addition to managing the agency and its myriad of fisheries management issues, Hogarth also directed programs to protect marine mammals and sea turtles and conserve habitats of managed species. During one meeting to acquire conservation easements on redwood forest land in California to protect endangered salmon populations, Bill was approached by an executive from a company that had diverse business holdings including an insulation plant in of all places, Jarratt VA. The executive wondered if Bill might be related to the wonderful lady who ran a small restaurant near the Jarratt plant. It was Bill’s mother, a small world indeed.

Bill’s efforts in managing living marine resources also extended into the international arena where he was elected to chair both the International Whaling Commission and the International Commission for the Conservation of Atlantic Tunas at the same time. Under his chairmanship both organizations made important strides in conserving species entrusted to them.

When Bill left federal service in 2007, he became the acting Dean of the College of Marine Science at the University of South Florida in St. Petersburg. There he was able to secure funds to rebuild laboratories, recruit new faculty, acquired the research vessel Weatherbird II and, perhaps most importantly, led efforts on behalf of the state of Florida to study the impacts of the devastating Deepwater Horizon oil spill of 2010. He was appointed by the governor to the Gulf of Mexico Research Initiative Board, which was developed to disburse $500 million in research funds to study the effects of the spill. When a new Dean was recruited for the College, Bill assumed the duties of Director of the Florida Institute of Oceanography (FIO), an organization supporting all academic oceanography programs in the state. The president of USF at the time, Judy Genshaft also asked Bill to serve as interim Regional Chancellor for the USF St. Petersburg campus which he did while also managing FIO.

A skill Bill acquired early on in his career was the ability to delegate and empower the people he worked with and to act as their advocate. He was all about providing opportunities for others. Bill was a fun person to work with and always a source of unconventional ideas. He is fondly remembered for enriching the lives of so many of those he befriended and he will be missed by all. No doubt there is also grieving in the town of Loretto KY, where Makers Mark bourbon (Bill’s favorite) is distilled.

In honor of his service to University of South Florida, the Florida Institute of Oceanography and the state, the FIO named its new research vessel, commissioned in 2017, the R/V William T. Hogarth. Bill’s legacy will also continue in perpetuity at USF and the College of Marine Science through The William T. Hogarth Fellowship in Marine Mammals, awarded annually to an especially accomplished biological oceanography graduate student.

In lieu of flowers, memorial donations may be made payable to the USF Foundation in memory of William T. Hogarth, PhD to The William T. Hogarth Fellowship in Marine Mammals (Foundation Fund Number 266012) at the Office of Donor Relations, 4202 E. Fowler Ave, ALC100, Tampa, FL 33620, Attn: Beth Corbin

If you wish to make a gift online, please click here.