/ Impact / A Million Reasons to Smile

A Million Reasons to Smile 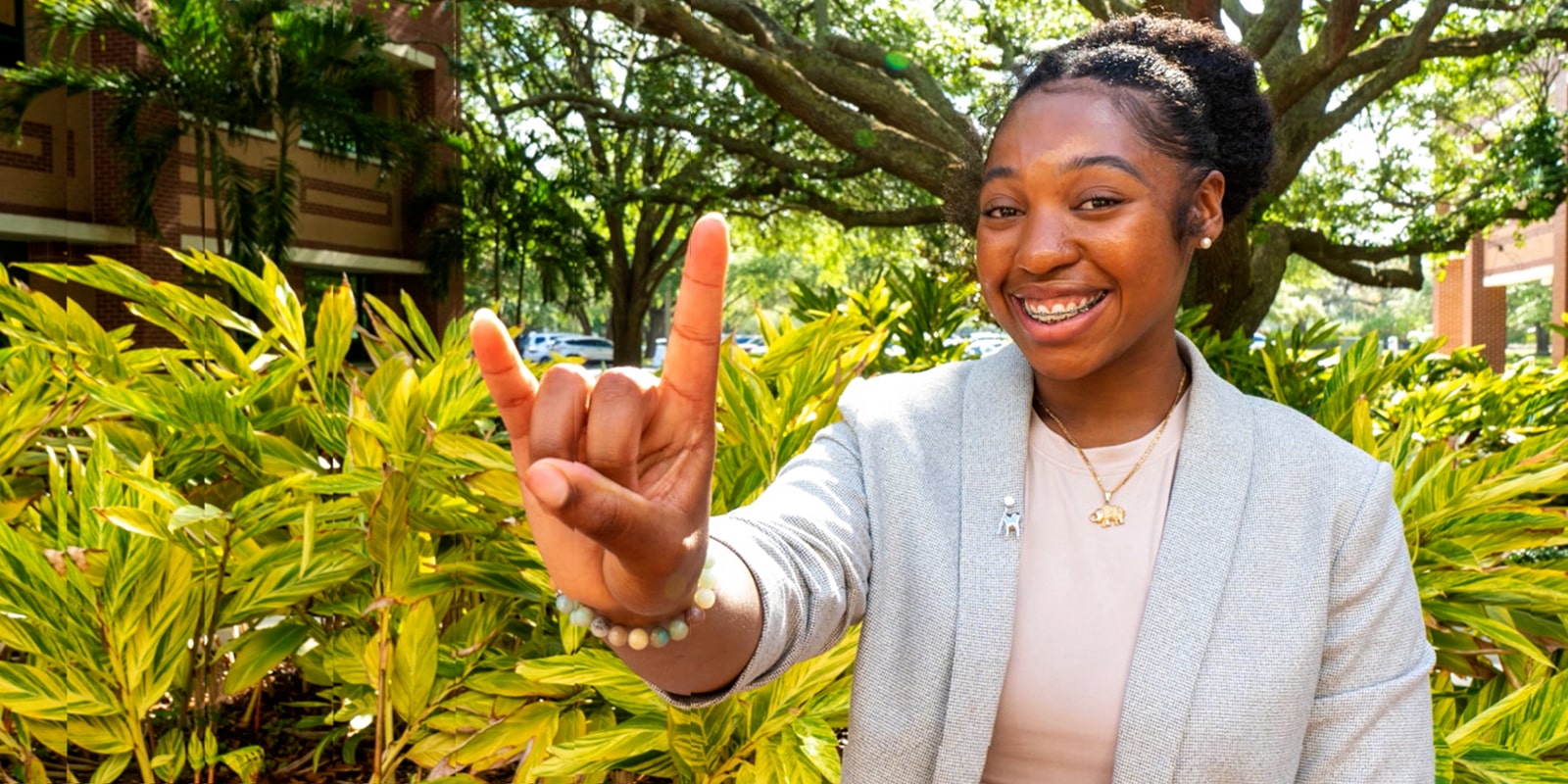 The day Jaqueria Lacy, ’21, learned whether her childhood dream of becoming an orthodontist would come true, she and a few friends went kayaking in Silver Springs. Manatees floated nearby in the crystal-clear water as she pondered if any of the 15 dental schools she’d applied to would accept her.

Then her phone rang. And it kept ringing.

Each time, she would see the area code or city pop up and know who the call was from.

“Seeing the phone calls pop up, knowing which school was calling to let me know they had accepted me into their program … It was such a great day.”

In the end, Lacy was accepted into all 15 schools and offered more than $1 million in scholarships.

“I only wanted to get into one,” she said with a laugh. “I remember going through my phone call list the next day to make sure the calls had actually happened. It was a surreal experience.”

Lacy’s success was not a surprise to those who know her best.

“There is no doubt in my mind that she will go on to achieve everything and anything she desires,” said childhood friend Karina Cancel.

Lacy always wanted to be a dentist. She decided to specialize in orthodontia after getting braces — and a confidence boost from her new smile. She wanted to do the same for others.

It was a lofty goal for anyone, made even harder to reach by circumstance. Lacy grew up in a low-income household in Polk County, Florida. Her mother, a single parent of four children, worked long hours to support the family; her father was incarcerated.

Where many kids might languish, Lacy found ways to flourish.

“Jaqueria is one of the most resilient people I know,” said Cancel, who has known Lacy since kindergarten. “I often find myself in awe of how she lets absolutely nothing get in between her and her dream.”

Throughout childhood, Lacy sought and found the connection her parents couldn’t provide by getting involved in various organizations, such as cheerleading.

That particular interest earned her a scholarship to Warner University in Lake Wales, Florida, as part of the school’s cheer team, a first step toward dental school. After two years at Warner, she transferred to USF so she could take the required science prerequisites.

Once again, she sought out organizations where she could connect with others like herself and build a support network — finding both in the Black Leadership Network (BLN) while researching scholarship opportunities.

The BLN scholarship she received provided both financial support and reassurance she was on the right path.

“There was a hurdle and then the hurdle was taken down to where I was able to get over it and continue the race,” she said. “It was definitely something that took a weight off my shoulders and made it easier to get where I needed to go.”

BLN gave Lacy an opportunity to work with other students who looked like her, with similar backgrounds and similar aspirations, she said. Just as in high school, being able to bond with people and learn from them was important throughout her college years.

“I was able to take a little gift from each person with me, and I’ll carry that on through my own life,” she said.

Investing in BLN is a rewarding opportunity for donors to see their own scholars thrive — and also make an impact on other students in the community.

Through the BLN Peer Partner Program, Lacy worked with a student at Tampa’s Blake High School. They met once a week to discuss and set short- and long-term goals.

“She knew where she wanted to be but not necessarily how to get there,” said Lacy. “Since I had already been through it (as a first-generation student), I was able to give her some tips and keys to succeed in what she wanted to do.”

During one mentoring session, a fellow BLN scholar asked to speak to the whole class. His actions and words left an impression on Lacy.

Lacy’s leadership and positive attitude made a tremendous difference in BLN, said Walter Jennings, the program’s director, who wrote one of her letters of recommendation.

“Jaqueria’s success is not a surprise to those of us in the Black Leadership Network,” he said. “She is well-rounded, resilient, poised, dependable and goal-oriented. We were fortunate to have her as a participant and are honored to call her a BLN alumna!”

Applying to dental school was “an experience like no other” for Lacy, requiring months of studying, testing and filling out forms. She submitted her applications as soon as the window opened in June 2021, and by July had already heard back from several schools wanting to set up interviews.

“I remember taking the time to just be grateful for that,” she said, thinking of how few applicants get that far. Since she was in the middle of a study abroad experience in Italy, supported by a Gilman Scholarship, Lacy completed interviews via Zoom.

She chose Tufts University in Boston, in part because, as a Florida native, she wants to experience living in a different part of the country, but also because it’s known for its diverse student body, something she’s grown accustomed to at USF.

“My hope is to motivate other people, especially people who come from a similar background as me. A lot of people in those circumstances might feel discouraged or without hope,” she said. “To be able to share my story and for them to see where I came from, to see that it can happen. I’m definitely looking forward to that.”