/ Impact / A Tribute to Gus Stavros

A Tribute to Gus Stavros 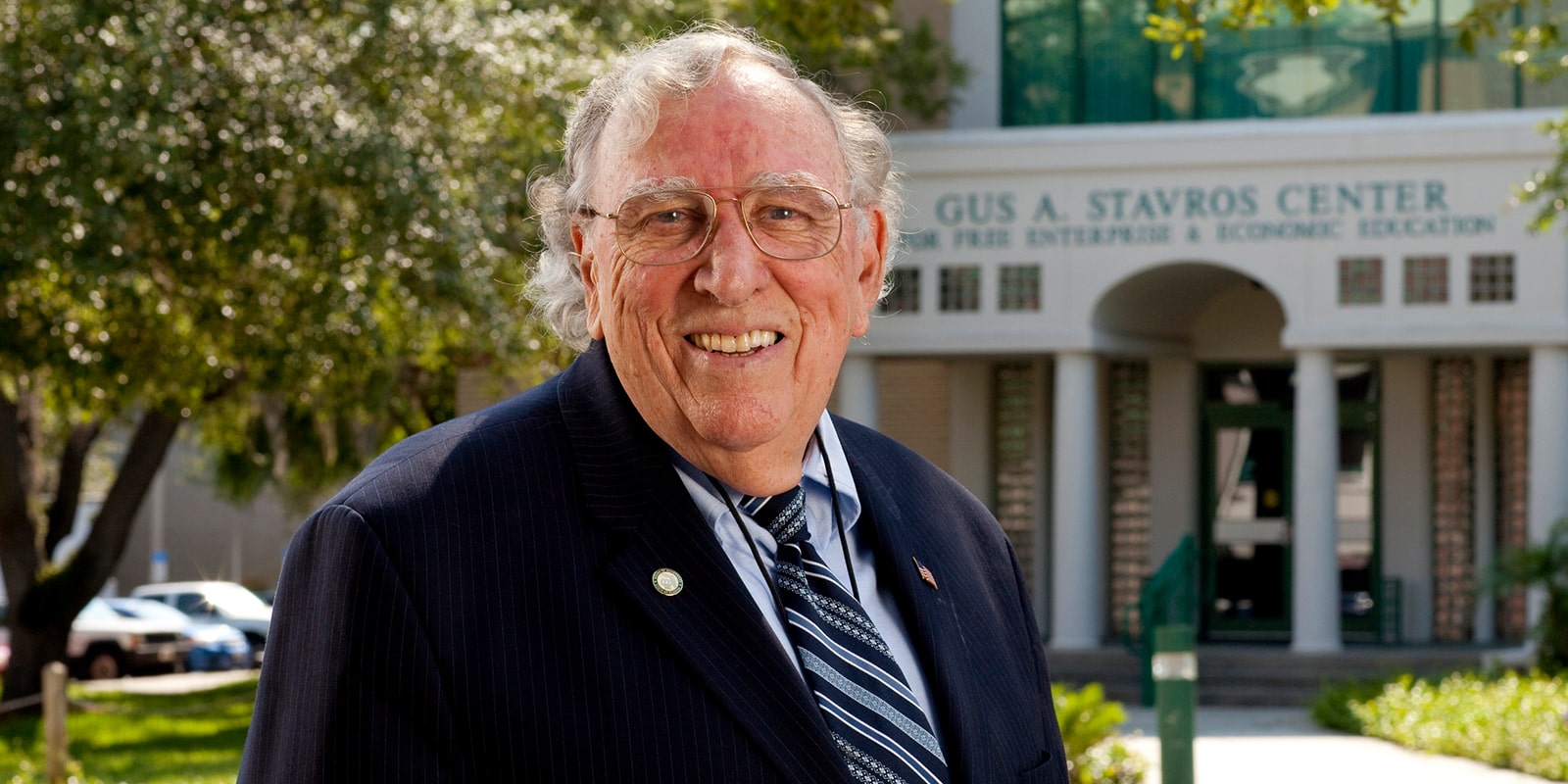 The University of South Florida community is deeply saddened by the recent passing of Gus Stavros, former member of the Board of Regents and the Board of Governors for the State University System of Florida.

“Gus Stavros’ longstanding commitment to championing free enterprise and economic education has made a transformational impact on thousands of teachers and students,” said USF President Rhea Law. “The University of South Florida and the state of Florida have lost a great advocate, a generous philanthropist and a dear friend whose legacy will live on for generations to come.”

“A statement he would make all the time was that the only way we’re going to solve the world’s problems is through education. That was his belief, that if we invest in education, we have a chance to resolve our issues,” said Dick Puglisi, Founding Director of the Gus A. Stavros Center for Free Enterprise and Economic Education and Professor Emeritus at USF.

In 1982, Stavros joined the Florida Council on Economic Education (FCEE), whose mission is to prepare Florida’s young people for personal and financial success through educational programs in economics, the free enterprise system and personal financial literacy. Through its partners, including USF’s Stavros Center, FCEE provides professional development training to educators and innovative instructional material for their classrooms.

Through his affiliation with FCEE, Stavros became involved with the center for economic education at Florida State University. He was instrumental in helping that center find a permanent home, donating half the money to renovate the building and endowing a chair. The building was named the Gus A. Stavros Center for Free Enterprise and Economic Education in his honor.

Back home in Tampa, Stavros similarly gave the University of South Florida half the funds needed to build the Gus A. Stavros Center for Free Enterprise and Economic Education and endowed the chair of the USF center.

“Through the establishment of the Gus A. Stavros Center for Free Enterprise and Economic Education, Gus Stavros created a lasting legacy in the lives of the children of the Tampa Bay region and beyond,” said R. Anthony Rolle, Dean of the College of Education. “He was a transformational leader who helped guide USF through its period of tremendous growth and increase in stature, both in the community and throughout the country.”

As a passionate resident of Pinellas County, Stavros gave generously to USF’s St. Petersburg campus as well, supporting the economics education program in the Kate Tiedemann School of Business and Finance and establishing the Gus and Frances Stavros Family Scholarship for Entrepreneurs.

In recognition of his service to USF, Stavros was awarded an honorary doctorate, as well as two of the university’s highest honors, the Distinguished Citizen Award and the Class of ’56 Award.

In the wider Tampa Bay community, Stavros became the founding chair of the Pinellas Education Foundation and helped establish the Gus A. Stavros Institute there. The Institute is comprised of Enterprise Village and Finance Park, which teaches free enterprise, the U.S. economic system, fiscal responsibility and ethics, and career planning to thousands of K-12 students each year. Together with Junior Achievement Worldwide, these programs have been replicated across the U.S. and the world, now reaching more than 400,000 students annually.

Outside of education, Stavros was involved in the formation of Ruth Eckerd Hall in Clearwater and the Palladium Theater in St. Petersburg.

Stavros’ journey to becoming a businessman and philanthropist began during childhood while working at his father’s diner in Elizabethtown, N.J. Born on Feb. 1, 1925, Stavros credited his father for teaching him his work ethic.

As a young man, he enlisted in the Army, fighting in WWII on the European front and receiving the Bronze Star Medal and the Purple Heart for injuries he sustained in combat.

After the war, he completed his education at Columbia University. He also reconnected with the love of his life, Frances Shaw, who he’d met during his senior year of high school. The two would marry and enjoy 68 years together before Frances’ death in 2017. The couple raised three children together, Paul, Ellen and Mark.

The family came to Florida in the 1950s, where Stavros found success as an entrepreneur, building Better Business Forms into a thriving business and selling it in the 1980s.

Rather than retire, Stavros reinvested his time and finances into the communities around him.

“He said, ‘You know, I want to see my money work. I don’t want to leave it after I die, because then I won’t know what good works it does,’” said Puglisi.

Having achieved the American Dream, Stavros dedicated his life to helping others do the same.