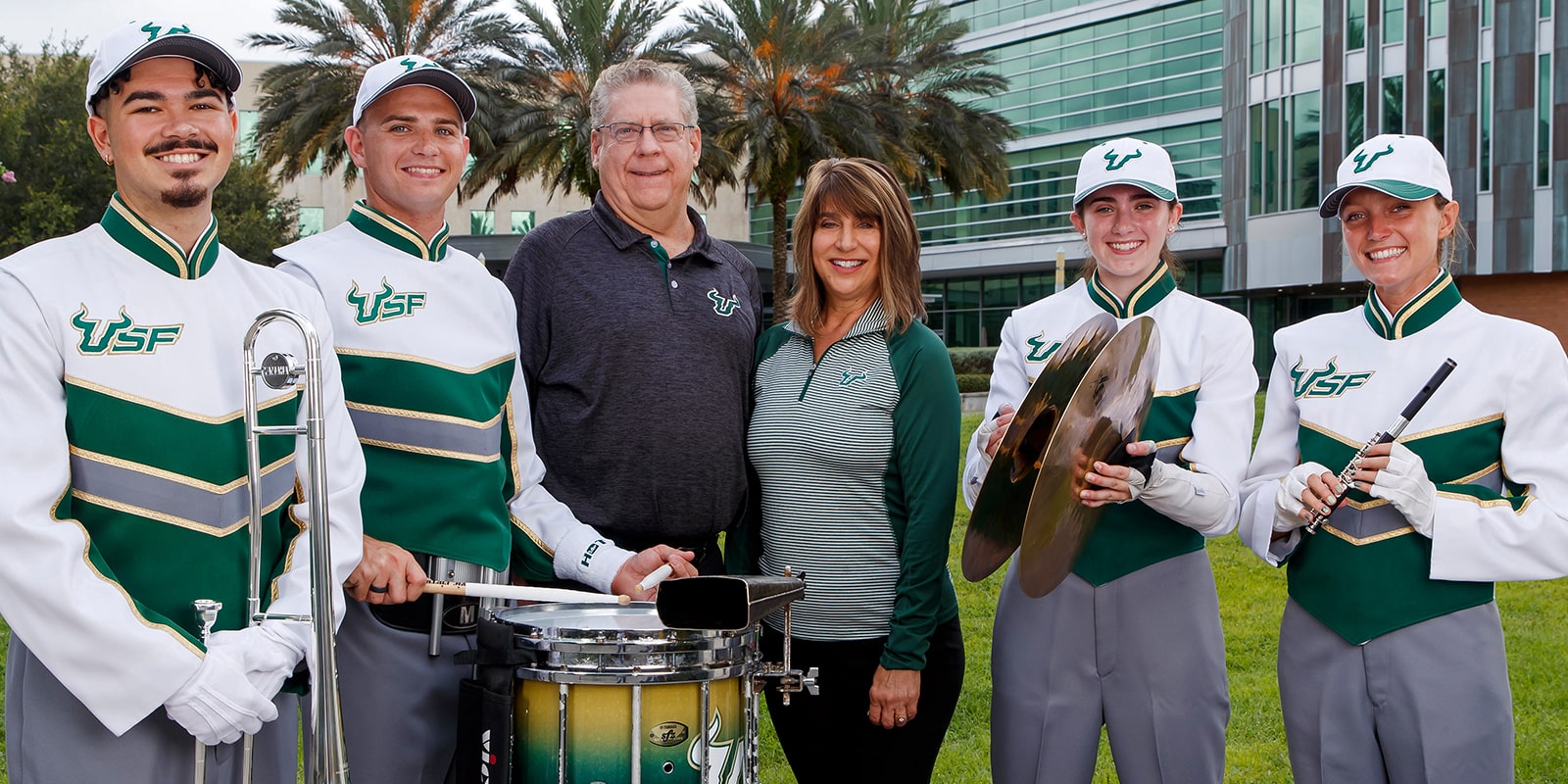 There’s a distinct theme in USF alumni and Life Members Debbie and Carl Lum’s dual gift to benefit the College of The Arts. Their generosity entwines a passion for preserving the past and building upon tradition. And you might say it all began with a chance encounter Debbie had with a USF legend in a Publix produce aisle some 35 years ago.

Right beside the fruit and veggie bins, she bumped into the embodiment of so much Bulls tradition and history, Phyllis P. Marshall, whose name would eventually grace the Tampa campus’ new student center.

Debbie, a 1985 graduate with a mass communications degree, had been volunteering for her Chi Omega sorority to help build Greek housing at USF. She had applied recently for the student center marketing director position and her grocery run presented the perfect opportunity to tell Marshall of her great enthusiasm and qualifications for the position.

“I don’t know if that conversation by the bananas fast-tracked my application, but I’d been told there were 200 applicants, and I wound up getting the job!” she says.

Debbie went on to work nearly 20 years at USF, starting in Student Affairs, moving to the Alumni Association and eventually transitioning to work in the office of then-President Judy Genshaft. Along the way, she started one of USF’s’ longest running traditions in 1995 called Patio Tuesdays that continues today, and even held a position in the Alumni Association called Keeper of Traditions.

It should come as no surprise that their $50,000 gift benefiting the College of The Arts is geared towards enhancing two elements of USF tradition: with half the amount funding renovation of the façade and interior of the Theatre 1 building, and the other half creating an endowment for the Herd of Thunder marching band.

The gift reflects Debbie’s determination to find ways to modernize iconic campus fixtures. And it mirrors the entertainment business path Carl, who earned his B.S. in accounting in ’85 and MBA in ’89, has followed as a theme park executive at Sea World Parks and Entertainment and now for Atlanta-based Herschend Family Entertainment, the group that owns Dollywood and the Harlem Globetrotters, among other attractions.

“I’m very interested in university traditions, and as an alumna it’s sometimes sad to watch things get torn down to make way for new ideas,” Debbie says. “I think there has to be a point at a relatively young institution where you want to preserve the history we have — and keep some of those things around by renovating them.”

For the Lums, the Theatre 1 building is a prime example — one of the first five buildings on the Tampa campus — that was home to plays, speeches and other events. They met with Chris Garvin, dean of the College of The Arts, and discussed his idea of renovating the building’s exterior and eventually updating the interior. Like the Lums, Garvin has embraced the idea of retaining the ’60s-era architecture.

The Lum’s support of the Herd of Thunder, has its own story. They’ve given over the years to USF Athletics, but that expanded when the younger of their two sons, Ashton, participated in the marching band.

“We always loved Herd of Thunder and the game-day experience it creates,” Debbie says. “When Ashton was in the band, we saw things more as band parents. And there was a particular moment that happened after the USF-FSU game in 2012 that really opened my eyes.”

The two bands met for a cymbal showdown, and Debbie noticed the newer, shinier cymbals from FSU’s renowned unit. “At that moment, I turned to Matt McCutchen, USF’s band director, and said, ‘Carl and I will buy new cymbals for the band. Just tell us how much to write the check for.’”

The Lums later joined with other parents to purchase new tubas.  Then, in consultation with Garvin, they learned that one of the band’s biggest need is an endowment to cover all manner of expenses that can arise.

“Debbie and Carl care about the intangibles, not just that USF is a great place to get a degree,” Garvin says. “They know the marching band is about conveying spirit. And they know that buildings and history show this is where we came from — that these are the traditions we build upon. That’s why the marching band and Theatre 1 aren’t so far apart in their minds. They’re each about creating a continuum of USF’s lineage.”

As for their own USF lineage, Debbie and Carl didn’t know each other when they attended school. They met after graduation during happy hour at a Tampa bar and hit it off. But Carl was swamped with his MBA studies and didn’t follow up. Undeterred, Debbie looked up his office number and called him, inviting him to a work function that next Friday. To her dismay, he declined, explaining he was busy.

It felt to Debbie like a brush-off, but a mutual friend intervened to let Carl know that a group of friends, including Debbie, was going out to a dinner the next Friday night. Again, Carl passed, explaining that he had class. “And I was like, ‘This guy is ridiculous — nobody has class on Friday night!’” Debbie recalls.

But the truth was, Carl did indeed have Friday night class for his summer MBA program. “If you missed one, you were toast,” he says.

Luckily, Carl’s class ended at 9 p.m. that night, and he decided to come late to dinner. “I was totally shocked — I didn’t expect him to show,” Debbie says with a laugh.

They’ve been married 31 years now, and split their time between homes in Atlanta for Carl’s work, and Tampa, where Debbie, author of five romantic suspense novels, volunteers at USF.  Wherever the location, they’re happy to help keep tradition alive for the university they love.