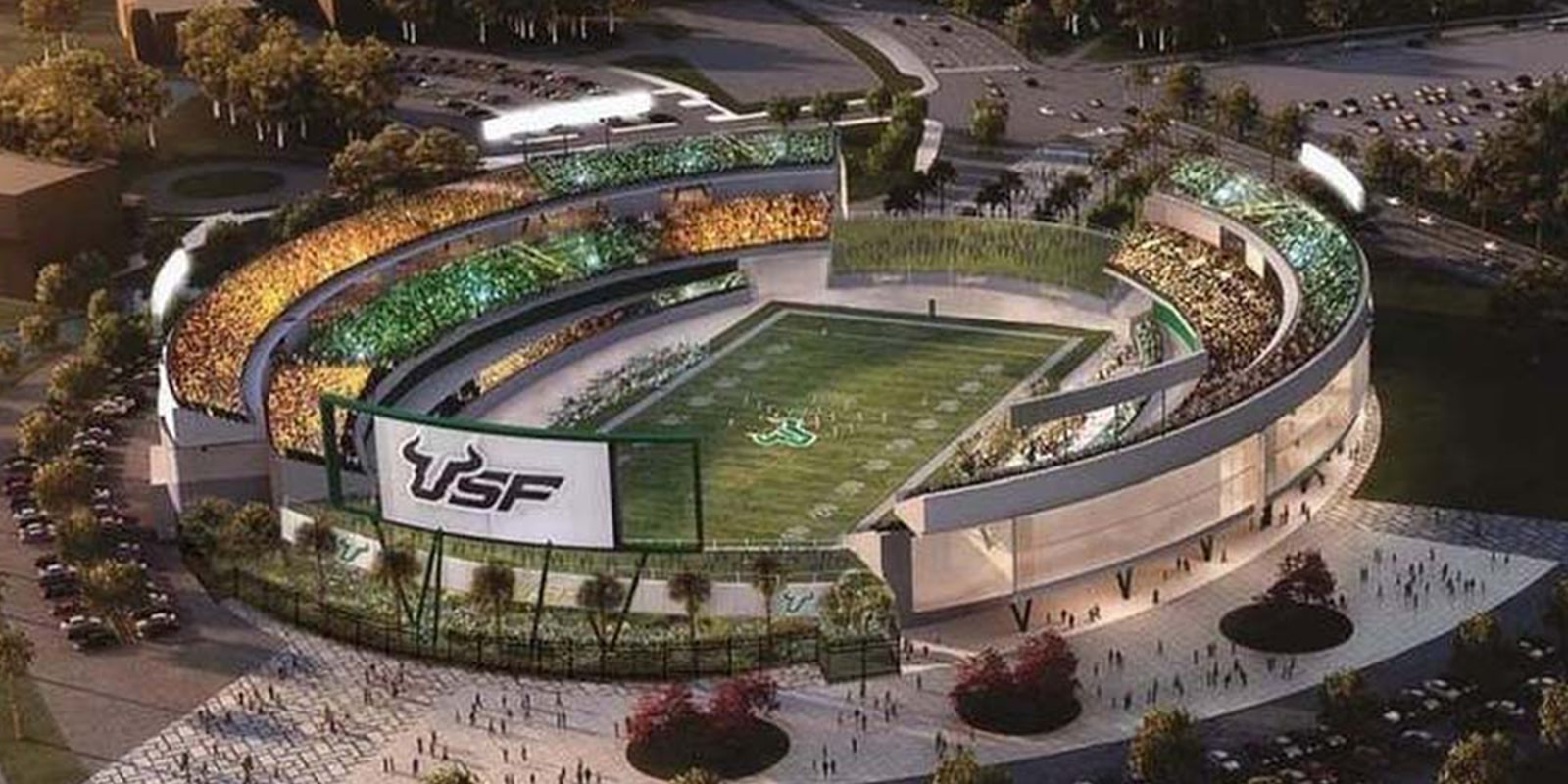 * Illustration for discussion purposes only – not actual rendering.

The University of South Florida’s plan to build an on-campus football stadium received a significant vote of confidence and generous philanthropic support today with the announcement of a $5 million gift from Jeff and Penny Vinik.

The Viniks have been strong supporters of USF for many years and were instrumental in USF Health’s expansion in Water Street Tampa. The Vinik Sport and Entertainment Management Program (SEM) in the Muma College of Business prepares students for careers in the industry, creating a talent pipeline for sports and entertainment venues in Florida and beyond. In 2021, SportBusiness named the Vinik SEM Program No. 3 in the world. The Viniks have also championed USF Athletics through support of women’s volleyball, men’s basketball, men’s tennis and women’s soccer.

“We are delighted that Jeff and Penny Vinik share our excitement for an on-campus stadium and see the positive impact the project will have on the University of South Florida and surrounding communities,” USF President Rhea Law said. “Their vision and investment have helped transform downtown Tampa, the Tampa Bay Lightning organization and our entire region, including numerous programs at USF. We thank Jeff and Penny for their continued support of the university.”

Last month, USF leaders shared that the Sycamore Fields site on the east side of the Tampa campus has been selected as the recommended site

for the stadium. The location, which is currently used for intramural sports, is within the USF Athletics district and sits near its operations facility and new Indoor Performance Facility. Positioned close to student housing and parking, with multiple options for tailgating space, the site provides an opportunity to enhance the campus experience to create a deeper sense of community and connection to the university.

“An on-campus stadium at USF will be a game-changer, literally and figuratively, for the university and our entire Tampa Bay community,” said Jeff Vinik, owner of the Tampa Bay Lightning and co-developer of Water Street Tampa. “I have been following the stadium developments, including the site selection, with great interest. The gift from the Morsanis inspired Penny’s and my investment, and the best part is this chapter of the story is just beginning. The Bolts enjoy the best fan and community support in the NHL, and in just a few short years, the Bulls will experience that in a completely new way in their campus home.”

When the stadium site selection was announced, longtime USF supporters Carol and Frank Morsani committed $5 million to the project in the hope that others would follow. The Viniks are the first to answer that call.

“We are thrilled that Jeff and Penny have stepped up so generously to support our Bulls and the on-campus stadium,” said Carol and Frank Morsani. “We said just last month that we were looking forward to others joining us in making this project a reality, and now we can’t wait to see who the Viniks’ gift will inspire next.”

"It is impossible to measure the positive impact the Viniks have had on the Tampa Bay region and the city itself, and their support of the on-campus stadium elevates momentum behind the project to another level," said USF Board of Trustees Chair Will Weatherford.

“It takes incredible effort on the part of the Tampa Bay community to make this ambitious goal a reality,” Weatherford said. “We will build this stadium because the Viniks and others like them are leading the herd, setting an example for others to follow.”

USF Foundation CEO Jay Stroman and Vice President of Athletics Michael Kelly serve as the stadium planning committee co-chairs and told the USF Board of Trustees in their last update that the stadium project schedule includes options for completion in 2026 or 2027.

“We are grateful to see Jeff and Penny Vinik, steadfast supporters of the university, help us get closer to our dream of playing home football games and hosting other major events right here on campus,” Stroman and Kelly said. “The gifts from the Viniks and Morsanis send a clear signal that the generosity of our USF community knows no bounds.”

The gift from the Viniks comes as USF celebrates Giving Week across all three campuses. From April 4-8, thousands of USF alumni, students, faculty, staff and friends use the week as an opportunity to support a college, program, research area or other cause important to them.