/ Why Give / Why You Give / Planning Ahead, Way Ahead

Planning Ahead, Way Ahead 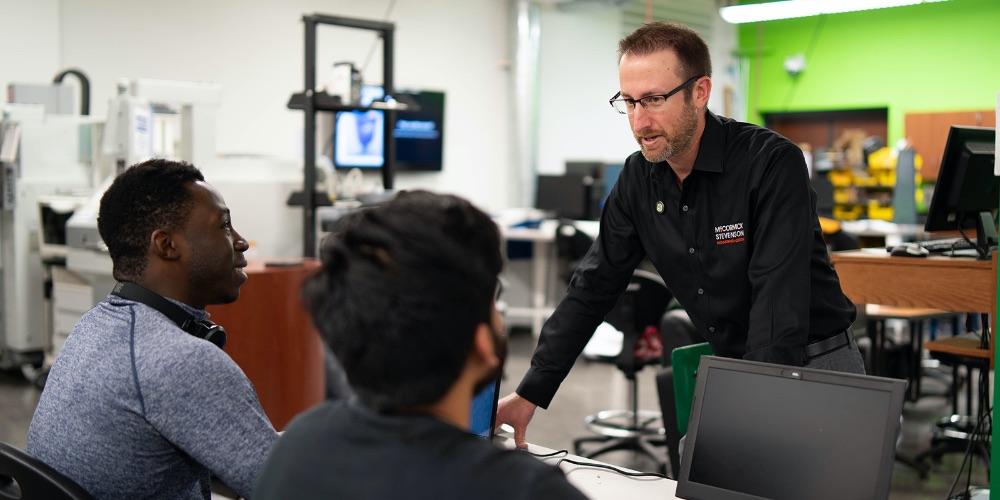 J.B. Wright ’05 exudes a warm and generous spirit that is readily seen when he speaks with students.

On a recent visit to a lab at the USF College of Engineering, he immediately spotted a couple of students he’d interacted with at a lecture and paused to chat about what they were working on and offer his advice.

Giving his time to students is something he has done with regularity since graduating. For instance, he volunteers with the Leadership and Engineering course, which teaches the additional skills engineering students don’t necessarily learn in their technically focused coursework.

“I always like to spread my knowledge, what I’ve learned throughout the years,” said Wright, who is also involved with the USF Engineering Alumni Society and works with the Society of Hispanic Professional Engineers and the Society of Women Engineers. “I’ve been so successful in my career, so that’s one thing I try to give back, helping others to be successful and get further in their careers.”

Engineering was a natural choice for Wright. Growing up, anytime his dad had an issue with, say, the lawnmower, Wright would be there next to him trying to figure out what was going on. And he loved to build with Legos or take apart an old radio to see its inner workings.

Once at USF, Wright narrowed his focus to industrial engineering, realizing he would have the option to work in a plethora of fields.

“Finance, medical, aerospace and defense, automotive — you name it and industrial engineers are used there,” he said.

Wright began his career with an internship at Honeywell. From there, he joined Sypris Electronics, which provided connections that would help him land jobs at Pall Aeropower, Lockheed Martin and eventually McCormick Stevenson Corp., his current employer.

“That is why one of the main things I give back to USF is networking. That’s one thing I preach to the students, and I coach them on. It’s all about networking,” he said.

In addition to a great deal of his time, Wright has given generously from his financial resources. Each year he donates what he can, and he has been a USF football season ticket holder since he graduated.

“I’ve always given back, but if it came to the time where I couldn’t give every year, I wanted to leave a legacy,” he said.

That legacy has taken the shape of $50,000 in his estate plan to create the J.B. Wright Scholarship Fund, which will one day provide scholarships to first-year engineering students.

As a student, Wright was the beneficiary of such a scholarship, receiving the L.A. Scott Endowed Scholarship, which was established by the late Linus A. “Scotty” Scott, a former USF College of Engineering faculty member, and his wife, Betty Jean Scott.

The scholarship helped Wright make ends meet as a student. A Tampa native, his father worked two jobs to put him and his siblings through private school. When it came time for college, though he received scholarships to pay tuition, he lived at home to make the finances work.

He also worked part time with his dad at a funeral home, which was his dad’s sideline in his off hours from the sheriff’s department.

“I got my work ethic from him,” said Wright, explaining his dad’s name is Barry, which is also his middle name. “That’s why I go by J.B. I wanted to have his name when people called me.”

Though he made this gift before he was 40, Wright feels it’s important for everyone to have an estate plan. It’s something he’s felt more acutely recently after a series of life-changing events.

Last year, he started a new job with McCormick Stevenson Corp. in February, got married in July, becoming a stepfather to two young daughters, and moved into a new home in December. And 2020 looks to be just as life-changing with a new baby on the way.

Speaking about his estate gift, he said in the long run it’s not a lot and it’s something that’s very easy to do.

“I just worked out a number I thought would still leave enough for my family. And that’ll continue to grow for my family, but I still have that amount set aside specifically for giving back to a student or more,” he said. “Of course, hopefully I won’t have to worry about it for a long time.”

It’s something he hopes others, of any age, will consider.

“My hope is to encourage others to do the same,” he said. “And to give more opportunities for students who don’t have the funds to take that final step of coming to college.”

Give to the Engineering Alumni Society Fund