/ Why Give / Why You Give / Grateful Bull Still Paying it Forward 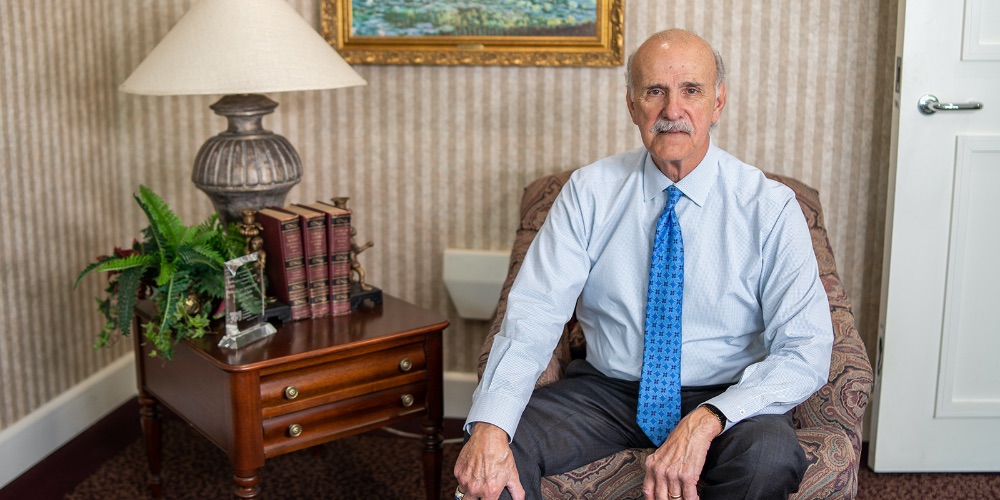 Before USF was built, Dominic “Dick” Puglisi and his friends had little hope of ever earning a college degree. None of their parents had gone to college. Even the idea of attending college seemed as out of reach as a trip to the moon.

Instead, they made more practical plans for life after high school.

Ray Fernandez would work in his father’s neighborhood grocery store. Fred Garcia had a job selling paint. Puglisi’s father planned to train him as a barber but passed away before he had the chance.

“I’ll never forget my cousin John Parrino saying that his godparents, who owned the Ferlita Bakery, told him not to worry as they already had a bread route picked out for him,” says Puglisi.

But the new university in their backyard changed everything.

In 1960, the year Puglisi and his friends graduated from high school, USF began accepting applications. The young men applied and were accepted as members of the charter class — the inaugural class of students at the fledgling university.

“USF was the defining experience of my life,” says Puglisi ’64, M.A. ’69. “Most people don’t understand how absolutely critical USF was, especially for us in Ybor City. There were six or seven guys who grew up together in the old neighborhood, all children of immigrants, who became members of the charter class. We were so proud, so gratified to be accepted. It made an enormous difference in our lives.”

More than 60 years later, Fernandez ’64 is a pediatric neurologist practicing in Tampa. Garcia ’64, who earned a degree in physics, now owns a company that services Department of Defense contracts. Parrino ’64 is a clinical psychologist in Atlanta. Another Puglisi friend from the neighborhood and member of USF’s charter class, Anthony Scolaro ’73, became a respected principal in the Hillsborough County Public School System. Puglisi’s younger brother, Vincent ’66, followed him to USF and went on to receive his doctorate in chemistry from the University of Texas.

While his friends and family used their experience at USF as a launching point for their careers, Puglisi dedicated himself to advancing the university that changed his life.

“Dr. Puglisi’s impact on the College of Education is immeasurable,” says Dean Robert Knoeppel. “He has served as a faculty member and as an assistant dean, but he’s best known for his leadership as chair and director of the Gus A. Stavros Center for Free Enterprise and Economic Education. Under Puglisi’s leadership, the Stavros Center at USF is recognized as the premier center for economic education in the state of Florida.”

Considered the model free enterprise center for Florida, the Stavros Center hosts more than 100 workshops and programs each year, providing training for more than 2,500 teachers — more than the other four centers in the state combined.

When Puglisi took over as director in 1980 at what was then called the Center for Economic Education, he determined the best way to help teachers was to create partnerships within the community. He cold-called local business leaders like Frank Morsani — for whom USF’s Morsani College of Medicine is now named — and asked them to teach Tampa Bay area teachers about business and how the economic system works.

“It wasn’t a hard sell,” says Puglisi. “Mr. Morsani said, ‘Of course, I’ll do that for you.’ He thought it was so important, he brought the general managers from all five of his dealerships to hear the message he delivered to the teachers.”

By the end of the ’80s, Puglisi had dozens of CEOs teaching at the center. That’s how he got to know Gus Stavros, a successful entrepreneur and ardent proponent for education, who believed so strongly in the center’s mission that he donated more than $2 million to support it. The brick-and-glass building on the USF Tampa campus and endowed chair are now named in his honor.

Under Puglisi’s leadership, the 40-year-old Stavros Center has been recognized for excellence in economic education at the local, state and national levels. It has received numerous awards from the Florida Council on Economic Education for best programming in statewide competition. It has also received three national Leavey Excellence in Private Enterprise Awards.

Walking into the USF Gibbons Alumni Center last year, Puglisi was shocked to find 100 of his closest friends, family and colleagues gathered to honor him.

They traveled from all over the country, coming together on Sept. 12, 2019 to celebrate an extraordinary milestone for an exceptional man — Puglisi’s 50th year as an educator at USF.

But they had another surprise for him.

In recognition of his five decades of service, the group raised $54,000 to endow the Dominic “Dick” and Janet Puglisi Endowed Stavros Center Fund, to support the center’s education, research and service mission.

To the man who dedicated his life to advancing the university and enriching his community, there is no more fitting gift.

“Being a faculty member in the College of Education and my leadership role at the Stavros Center is truly my way of giving back,” says Puglisi of his own contributions. “My wife and I are thrilled to create a first-generation scholarship through my estate. If I can help students come to USF after I’m gone, that will be a wonderful legacy to leave behind.”

USF history professor John Belohlavek, a friend and one of the co-conspirators who lured Puglisi to his surprise celebration, says the educator’s work will endure for generations, as the teachers he influenced pass his lessons on to countless students.

It’s a gratifying concept for a man who knows well the transformative power of education. In many ways, the Ybor City kid with down-to-earth dreams has rocketed to the stars.

Give to the Puglisi Endowed Stavros Center Fund