/ Why Give / Why You Give / The Morsani Mission 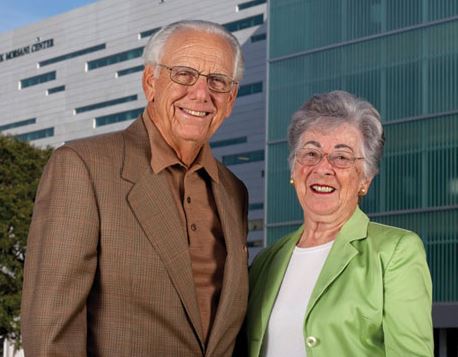 "We believe in USF.  We believe in investing in this community, and in helping to bring together leaders who are dedicated to the same thing. Just look around at the USF community and you will see everything an individual or family needs is right here. ... You have to be visionary to make things happen. Our vision is to help improve people’s lives, because we can. One person can make a difference, and lead the way, and that’s what we want to do.” – Frank Morsani

“It’s how Frank was raised – to give back to your community – and I picked it up from him when we got together. We want to make improvements in our community wherever we can.” – Carol Morsani

Both Frank and Carol have positively impacted USF and the community through a shared vision that believes in building up the community by supporting the university. For example, their support of the Morsani Center, allows patients to experience the future of medical care in a sophisticated climate with an emphasis on customer service, while providing students with an advanced learning environment. The naming of the building after the Morsanis was a Board of Trustees decision to acknowledge their generous leadership gift to USF that helped launch the USF: Unstoppable campaign. That gift also made possible the NFL-quality football practice complex and a new stadium for the women’s softball team. Both athletic facilities opened this year (2011), adding superior training and competition venues to the athletics program, as well as enhancing recruitment of future student-athletes. Their gift was to be used, as Carol describes it, “wherever it was needed most."

Married for 60 years, residents of Tampa for more than 40 years, and now ‘officially’ retired, the Morsanis have earned a reputation as beloved and well-known philanthropists, business leaders, and community advocates. Carol, as director of the Frank and Carol Morsani Family Foundation in support of education, the arts, and healthcare, has made an impact in numerous community programs, including serving as founding Honorary Chair of the Women in Leadership & Philanthropy (WLP) program at USF. Frank, as Chairman of Automotive Investments, Inc. and Trustee of the Morsani Family Foundation, is known as a die-hard advocate of education and building leadership within communities, and a seasoned fundraiser. He received national recognition when appointed by Presidents Bush and Reagan to two terms on the Small Business Council, and chaired the Board of the United States Chamber of Commerce.

Give to Morsani College of Medicine