/ Why Give / Why You Give / For Love of the Profession

For Love of the Profession 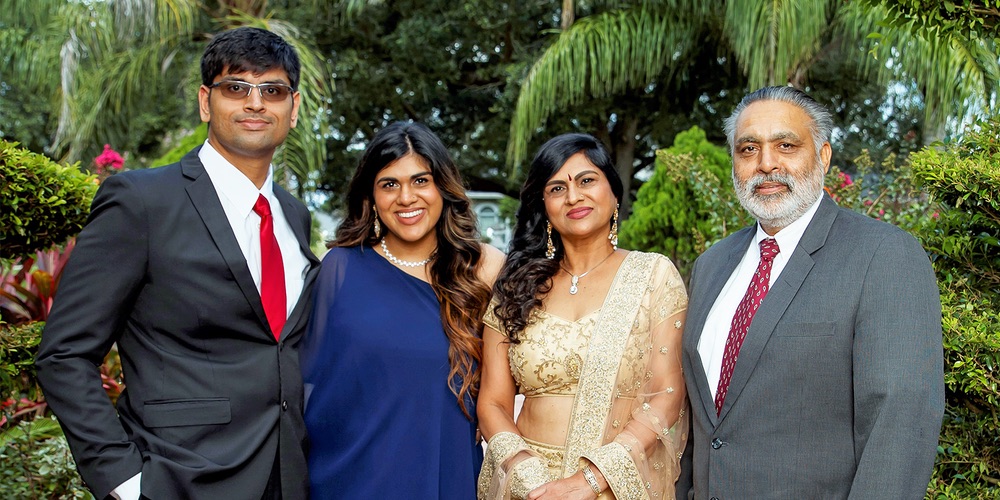 Manjit Kundlas calls it her “second inning” (as in cricket, not baseball). With her two children grown and now both enrolled at the USF Health Morsani College of Medicine, Manjit felt it was time to pursue something she wanted to do all along.

So in January, she temporarily relocated to the Caribbean to begin medical school herself at the American University of Antigua.

“The kids were equally motivated. They said, ‘Okay, Mom, now why don’t you pursue what you want to do in your life?’” Manjit said. She wrapped up her first semester in early July, virtually due to the COVID-19 pandemic. Her next semester is also online.

“God has been very kind to me. It’s a very humbling experience,” she said. “I could not believe that I’m getting this wonderful opportunity, but the reality is settling in now. I’m very happy, because that’s what my dad wanted me to be. I wish he was alive today. He would have been very proud of me.”

A passion for medicine clearly runs in the family. Kulmeet Kundlas, the patriarch of the clan, is a physician with a thriving internal medicine practice in Winter Haven, Fla. Educated in India, he completed his residency at a New York City hospital. The family settled in Winter Haven, drawn by the weather, which is similar to their native Punjab, India, and proximity to Orlando.

As their children entered college, and the couple entered a new stage of life, Kulmeet sold his more traditional practice in 2014 in order to set up a new practice, which he describes as moving away from an episodic and split care system to a whole care model.

“God has granted us this opportunity that we could do things on our terms, the way we want to do them,” said Kulmeet.

Manjit, meanwhile, was busy raising the couple’s two children, Anmol and Ajay, as well as providing support for Kulmeet’s medical practice. While Manjit earned a master’s degree in bioscience and even took the MCAT, she said the time wasn’t right for her to pursue her career.

“I devoted most of my time to the kids’ education and their upbringing, and I took care of the practice all this time as well,” she said.

Saving for their children’s education was always of primary importance to the Kundlases, especially as it became clear they both wanted to pursue a career in medicine.

“We came to this country with education in our hand. Once a person is educated, there are no limitations,” said Manjit. “We started out with $80, but also our degrees. We were educated. And that’s why we feel everybody should be educated.”

When Anmol and Ajay decided to attend USF, attracted by the Judy Genshaft Honors College and with an eye on the Morsani College of Medicine, much of their tuition and fees were covered by scholarships and awards.

With their educational nest egg virtually untouched, the Kundlases started thinking of what they should do with the funds.

“Actually it was Manjit’s idea. She was like, ‘We have saved the money. It was earmarked for education. The kids are fortunately doing very well.’ So we had a conversation about creating the endowment so that somebody else can benefit from it,” said Kulmeet.

“There was no timeline,” said Kulmeet. “It was just a natural progression from Honors College to medical school.”

Manjit said their gifts to the Morsani College of Medicine are also spurred by wanting to support the medical field.

“We have love for this profession,” she said. “Especially in the U.S., we are in need of doctors. Being in the profession, we know how difficult it is to fill positions, particularly in rural areas. We could feel the need, and we appreciate when somebody is doing something to improve this field. To us, if we can be a part of that, directly or indirectly, it’s worth it.”

As for the student recipients of their scholarships, Kulmeet said he hopes they’ll “just be good students.”

Manjit is glad to be able to take away a bit of the financial burden.

“If we can alleviate and help them have one less problem in their life, that’s the difference we are making,” she said.

For Jeffrey Liu, the first recipient of the Kundlas Family Endowed Scholarship, the support is so much more than financial.

“Knowing that I am worthy of support from people I had never met before in my pursuit of my dream of being a physician is definitely something that motivates me to do the best that I can,” said Liu, who completed his undergraduate degree at Penn State and was drawn to the Morsani College of Medicine because of the SELECT program.

“Sometimes I lose track of my ultimate goal when I am studying seemingly obscure facts about certain topics,” said Liu, whose interest is emergency medicine. “But knowing there are people who believe in me makes me all the more dedicated to doing well for both my own sake and my future patients.”

Impressed by the new Morsani College of Medicine facility downtown, the Kundlases have also generously made a $100,000 gift to name one of the building’s Collegia rooms, gathering places for each of the nine Collegia medical students are placed into during their first year.

“I think they have created a beautiful environment, very integrated with technology and research,” said Kulmeet. “They have done a beautiful job.”

Kulmeet explained they didn’t make the gift for the name recognition, but later on Manjit thought seeing their name might inspire people.

Manjit said her daughter couldn’t wait for the new facility to be completed. Incidentally, Anmol and Jeffrey Liu are classmates. And the Kundlases’ son, Ajay, began classes at the college this fall.

“They’re the lucky ones to be the first ones there and do most of their schooling from there,” Manjit said, adding that touring the building made her want to be a student studying there.

“I can come back and do some rotations there, or maybe do some research to be part of this university institute,” she said. “There is still time.”

Give to the Kundlas Family Endowed Scholarship