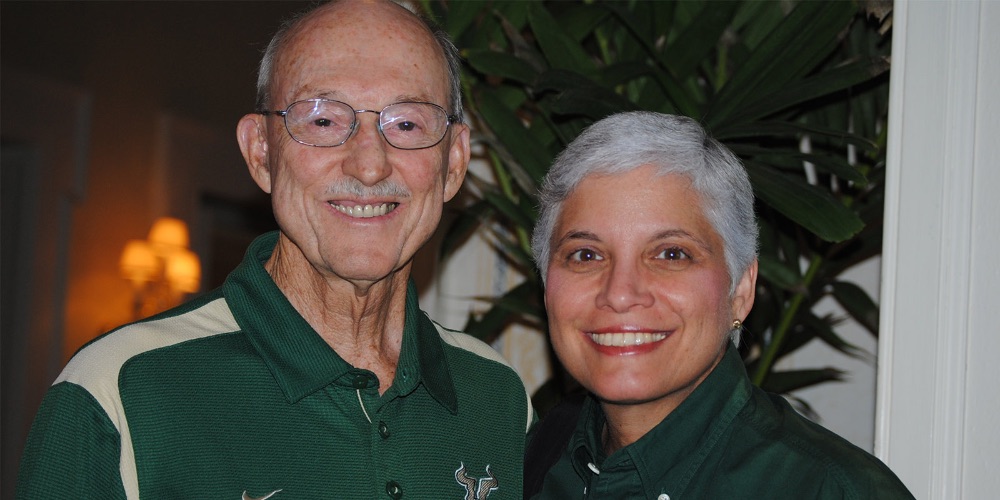 Born and raised in North Carolina during the Great Depression, Dan Johnson learned early in life the value of hard-earned money and frugal spending practices. As the son of a city bus driver and stay-at-home mother, he never dreamed he would be able to attend college, but his high school teachers urged him to find a way.

At age 8, Dan took a job delivering newspapers with his older brothers. By the time he was 14, he had his own route, rising before the sun, and bicycling 7 miles through the sleepy streets of Winston-Salem to deliver newspapers. When he finished high school, he had saved up $600, enough to fund his college dream, if only for a little while.

“I thought maybe I could go at least one year,” Dan said. “At the time, my brother Ralph was using the GI Bill to go to The University of North Carolina at Chapel Hill. He was staying in a two-bedroom veteran’s dormitory — a military barrack left over from WWII called ‘Victory Village’ — and he offered to let me live with him and his wife while I attended college.”

During his first year at Chapel Hill, Dan found a part-time job working at the school library. The money he earned covered his bills without touching any of his newspaper savings, giving Dan the confidence to enroll in his second year of college.

By working 20 hours a week during the semester and full time every summer, Dan inched his way, one step at a time, towards his diploma, finally graduating in 1959 with a bachelor’s degree in business administration, with a focus in accounting. But the difficult balance between the dual roles of student and worker continued to weigh on his mind.

“I’ve always thought, ‘Wouldn’t it be wonderful if kids didn’t have to work so hard to put themselves through school and could just enjoy the experience.’ Education changed my life and so I would love to be able to help other students have that same kind of experience — realize seemingly out-of-reach dreams, and be able to focus on their studies without the burden of debt.”

More than half a century later, Dan is taking action on that thought. He and his wife, Tina, support the USF School of Accountancy through Dan’s IRA funds, donating each year part of his required minimum distribution to the school and funding student scholarships for studies abroad.

“Dan’s retirement accounts are designated to charity, but it’s an advantage to be able to give the funds earlier and at the same time avoid paying tax on the required minimum distribution from the IRA accounts,” said Tina Johnson, advisor to the CEO at Publix Super Markets, and board member and treasurer of Publix Super Markets Charities. “You always like to see the impact of your donation. And the sooner you can make it, the sooner it can begin to make a difference.”

The Johnsons’ gift isn’t the only way the family stays connected to USF. Prior to retiring as vice president and controller of Florida Progress Corp. (now Duke Energy Progress), Dan served on the USF Accounting Advisory Council for 20 years and now holds emeritus status on the council. Tina graduated from the USF School of Accountancy in 1980, followed by Dan’s daughter Meredith in 1990.  Tina is also a current member of the USF Foundation Board and the Accounting Advisory Council.

“USF has an outstanding School of Accountancy program,” said Dan. “When I was a practicing CPA and recruiting new talent, my experience was that the graduates of USF had a much better understanding of the fundamentals of accounting compared to most of their peers. The USF accounting student is generally a step above students from other Florida schools. I think that is what we’ve all come to expect from USF. This is one of the many reasons I enjoy being involved and contributing to USF.”