/ Why Give / Who you Help / Sharing Success Beyond Service 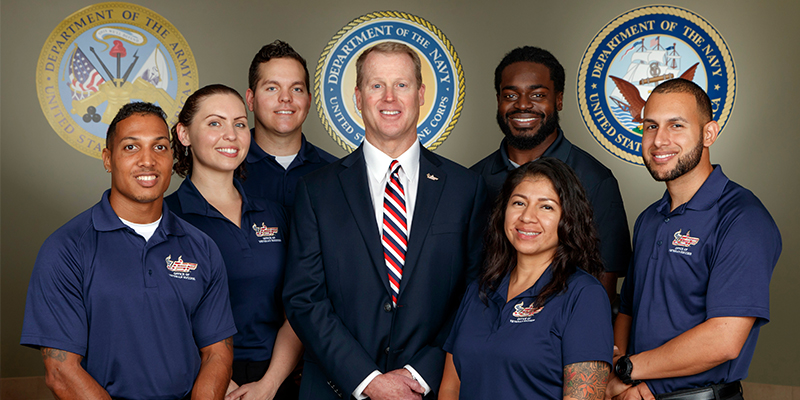 A thousand dollars can make the difference between earning a college degree or leaving school only a few semesters shy of graduation.

Just ask Dr. Larry Braue, director of the Office of Veteran Success at USF and a 27-year veteran of the U.S. Army. His department focuses on easing the transition from military to civilian life for the more than 1,800 student-veterans at USF and assisting them in finding success beyond service.

“Veterans are a unique student population,” explains Braue. “They’ve volunteered to have their lives disrupted, to be sent overseas, to sacrifice and fight in wars – all for the good of our country. When they return, they have a lot more on their plate than your traditional fresh-out-of-high-school student. They might be in debt, maybe got married and are supporting kids or dealing with medical issues."

Compounding the problem is the unrealistic timeline the GI Bill uses to fund tuition, allowing veterans only 36 months to finish school, a high standard that only 40 percent of all college graduates achieve. These factors contribute to a significantly lower graduation rate of student veterans compared to their younger, civilian peers across the nation.

"Once veterans exhaust their GI benefits, many are forced to drop out,” said Dr. Braue. “That’s why scholarships are so critical to help them reach the finish line. It is incredible what an extra thousand bucks can do to get them through a lean time and on towards a degree."

For USF alumni Terri Gower ’94, ’97, and her husband, Scott ’98, supporting veterans has always been a cause close to their hearts. Scott is a decorated U.S. Air Force veteran and Terri’s family boasts a strong tradition of serving in all branches of the military.

“To see these veterans so close to finishing, lose their funding and drop out of college, it’s just not right,” said Terri. “We are so fortunate to now be a position where we can make a difference.”

After years of struggling to make their accounting business, Quantum Peak, profitable, Scott landed a large account in 2015 that enabled the organization to grow tremendously. With the business prospering, the couple began looking for opportunities to share their success with the community.

At USF, this took the shape of two $30,000 endowed scholarships to help student veterans stay in school. The Quantum Peak Last Mile Scholarship is designed to support veterans who have exhausted their benefits make it that “last mile” to graduation, while the Scott and Terri Gower Veteran Leadership Award recognizes veterans with financial need who excel academically.

“Giving back is the right thing to do, it’s really that simple,” said Scott. “If we can create 10 more scholarships before I retire, we will. Helping veterans graduate and start a new chapter in their lives – it is a powerful thing to be a part of.”

Give to Veteran Leadership Award