/ Why Give / Who you Help / Powered by a Special Bond 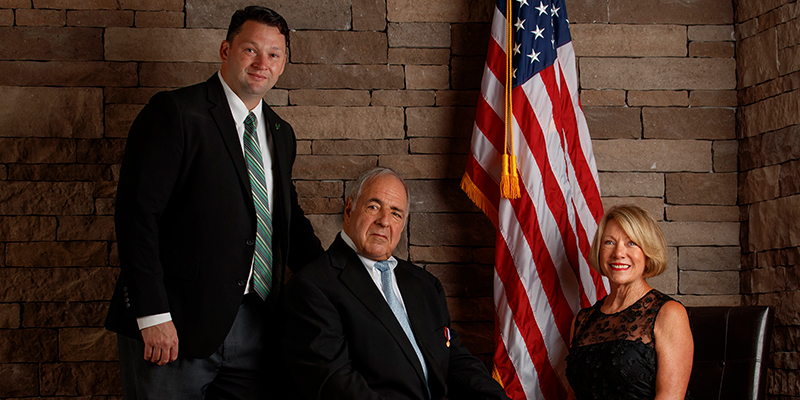 The door to Room 100 stands out in a long, quiet hallway of the modern assisted living facility – just like the man who resides these days on the other side of it. A wreath adorned with blue and yellow daisies displays a glossy print of Tropicana Field’s baseball diamond, an array of Tampa Bay Rays logos and a Fighting Irish emblem. But the colorful entrance now features another familiar element: a sticker with the green horns of the University of South Florida.

This is the small, North Tampa apartment that Vince Naimoli now calls home. The wreath reflects many facets of his persona: the once fiery entrepreneur who finally brought major league baseball to the Tampa Bay area, the proud alumnus of Notre Dame University – and, now, a patron saint of USF Athletics. “I just want to help the kids,” he says in a hoarse, choppy tone, the result of a debilitating neurological condition called progressive supranuclear palsy that has robbed him in the past year of his balance, much of his speech and his ability to live independently.

In his heyday, Naimoli was often known for his hard-nosed manner – the precise trait that helped him take on the big-league powers against long odds and secure an expansion franchise, the fledgling Tampa Bay Devil Rays. But there’s another, lesser-known side to the Rays’ founding owner – a kind, philanthropic streak that he and wife Lenda have displayed through the years with generous gifts to Notre Dame; the New Jersey Institute of Technology and Fairleigh Dickinson University, where he earned his two master’s degrees; and the University of Tampa.

But now USF is the beneficiary of the couple’s caring ways: the recipient of a transformational gift of $1 million will benefit the program in multiple areas, supporting projects in tennis and football, as well as renovations of the Fishman Family Student-Athlete Enrichment Center, with $1 million planned as an estate gift. The landmark gesture follows two small university-wide endowments established years ago – and is the result of a special relationship that took root, completely by chance, over the course of a decade.

It involves Dr. Andrew T. Goodrich, USF’s senior associate athletic director for external relations. Prior to earning his PhD from USF, Goodrich had earned his MBA at Notre Dame in 2005. He attended class in the Naimoli Family wing of Notre Dame’s business school, never giving much thought to the man whose name graced the facility. But soon after graduating he was hired by USF Athletics as staff accountant and, hoping to broaden his local network, joined the Tampa chapter of the Notre Dame Alumni Association. At his first event, he saw Naimoli walk into the room. Goodrich could tell many people were wary about approaching him due to his reputation for brusqueness. “For whatever reason – maybe because I grew up on a dairy farm in New York – I just felt comfortable introducing myself,” he recalls.  “I said, ‘I want to thank you for the donation you made to Notre Dame’s business school.”

They talked and instantly clicked. In time, Naimoli became something of a mentor to Goodrich, who stayed in touch as his career blossomed, taking him back to New York and then to South Florida. But when his dream job opened at USF in 2014, Goodrich returned to Tampa – and made a lunch date with Naimoli to catch up in person. It was the first of what became many casual get-togethers, a natural process that ultimately paved the way to the Naimolis’ gift – one that prompted USF Director of Athletics Mark Harlan to say, “Their incredibly generous commitment is very exciting for our program and we are grateful and humbled by their vital support of our shared vision for excellence.”

The key moment, Goodrich recalls, came when he explained to the Naimolis that his “U” lapel pin didn’t just stand for USF but underdog – a program vying for greatness against long-established state schools. That truly resonated because each had come from humble roots – Vince from working-class Paterson, N.J. and Lenda from a farming family in North Carolina. Still, what made Naimoli want to support USF Athletics in such a major way? “Andrew,” he answers huskily, without hesitation. Lenda elaborates. “He’s like the son we never had,” she says.

In the end, it was a gift that emerged over a decade – born of friendship and trust, and the heart of the man who now lives in Room 100.

Give to Naimoli Athletics Fund