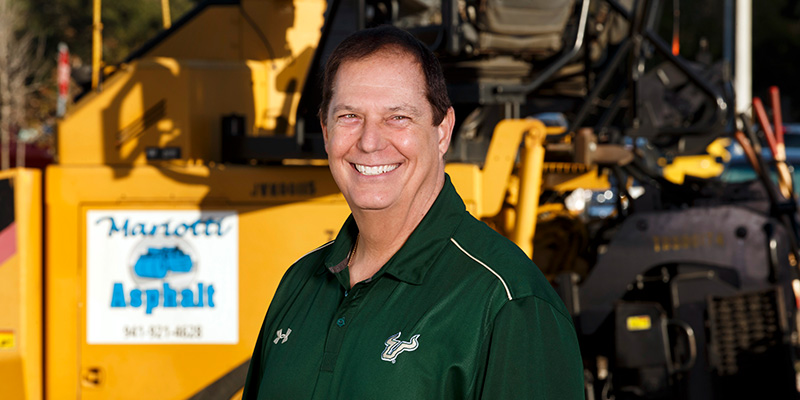 The big yellow paver rolls down the ramp of a hulking transport truck, chugging into view on a sweltering, sunbaked afternoon. The heavy equipment, bearing the letters “Mariotti Asphalt,” is set to surface a sprawling parking lot in Sarasota. But when it comes to paving the way, the machinery doesn’t hold a candle to the man supervising nearby.

He’s Bill Mariotti, owner of the company and one of USF Sarasota-Manatee’s most inspiring graduation tales ever. And his nickname, Paver Bill, says it all. He has smoothed the path forward for untold students across the USF spectrum with a transformational gift earlier this year – a deferred amount of $3.5 million that will benefit numerous areas in the University System. “I just wanted to return the favor to my university for giving me so much,” he says.

Then again, Mariotti earned every bit of what has come his way. His achievement has almost become the stuff of lore at USFSM – how he graduated in 2015 with a business degree after more than 30 years away from school. What caused him to leave just five classes shy of graduating, and all that he accomplished during the span of five U.S. presidential administrations, is an essential part of his story.

While working part-time for his father’s site development company, and simultaneously carrying a full-time course load at USF Tampa, disaster struck. The elder Bill, a veteran construction worker, fell while walking on a fiberglass skylight during a construction demolition project and smashed through the ceiling 12 feet below. He broke both ankles and legs in the near-fatal fall and surgery kept him out of work for months. Mariotti tried carrying on school, but realized he was needed by his family to help run the business with mother Carmen and sister Debbie. One year soon blurred into the next, and in time he was running the company himself.

But a handful of friends made a point of suggesting that Mariotti should complete his degree. And he eventually decided to go for it in the summer of 2014 at age 53. It took some adjusting – so much was done now on computers and the internet. But Mariotti completed his remaining classes, taking one per semester at night, and accepted his diploma in the winter of 2015 from USF System President Judy Genshaft. Dr. Anila Jain, a USF alumna, couldn’t have been happier. She has known Mariotti since elementary school and today serves with him on numerous committees at USFSM. “I’m very proud of his commitment to USF,” she says. “Bill is an amazing person with such a generous heart.”

Adds longtime pal Ted Bogusz: “Watching him walk across that stage, I almost cried. I’ve seen Bill grow through all of this.” Now he is helping his alma mater grow, with a gift that will benefit USF in multiple ways, including business programs at both USFSM and USF Tampa, Athletics and the arts, his Sigma Nu Fraternity, USFSM Facilities Planning and Management, and the much-anticipated STEM facility on the Sarasota-Manatee campus. “We’re so fortunate that Bill has decided to leave a lasting legacy for our students through this planned gift,” says Dr. Terry Osborn, USFSM’s interim regional chancellor.

Soft-spoken and shy by nature, he doesn’t seek the spotlight, but basks in a deep feeling of connection with USF – a kinship he proudly displays on his custom Bulls license plate WJM15 bearing his initials and year of graduation. “This is my family,” he says.

And Mariotti is glad to help pave the way – with a nickname that truly fits the Bull.

Give to USFSM Alumni Chapter

Our students contribute energy, curiosity and enthusiasm to our campus environment.