/ Why Give / Who you Help / Opening a Digital Window

Digital Window To The World 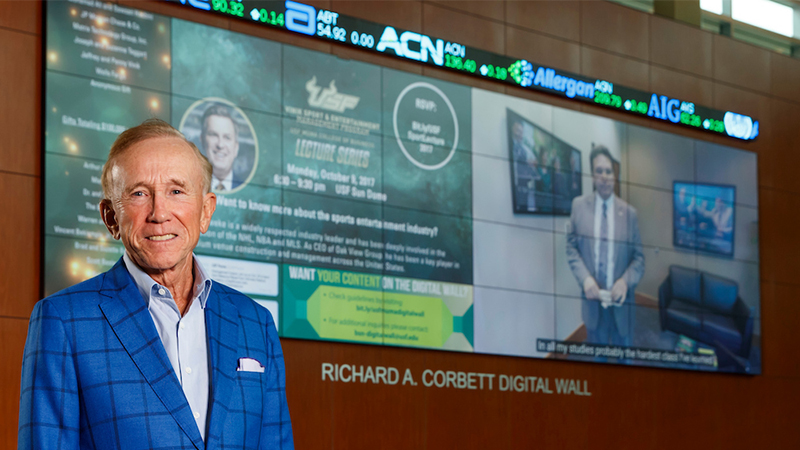 A vast and vibrant window onto the world now greets students and visitors as they step inside the spacious atrium of USF’s Muma College of Business. But when Richard Corbett looks at the massive digital wall that bears his name, his focus extends beyond the multiple screens flashing with TV news, university updates, dazzling graphics and streaming stock numbers.

He sees an instantaneous connection to young minds – and a way to help them connect in their daily lives.

“The wall reflects what this generation is,” says the longtime developer and entrepreneur, sitting nearby the Richard A. Corbett Digital Wall that now presides above the Muma atrium. “It’s intended to be an area that engages students, not always through words but through images as well. It’s there to grab their attention with a fast-paced flow of information, and help prepare them with the knowledge they need to face challenges and stay focused.”

Corbett, who made the digital wall a reality with a gift of $500,000, draws a parallel between its impact and his early years as a lightweight amateur boxer.  “When I was in the ring, I had to be prepared and focused because so much was coming at you quickly that you had to process and react to,” he says. “That’s the same thing we face in life, and it’s what this wall symbolizes. You have to know where you want to go, how you’re going to get there and whether to make changes in your approach.”

Dean Moez Limayem couldn’t be more excited about Corbett’s contribution, a cutting-edge grid of interlocking screens that operate independently, conveying developments from at home or abroad. “Many students at USF and colleges across the country don’t have the general knowledge of what is going on in today’s world, what is transpiring on Wall Street or the latest events in the Middle East,” he says. “They can’t be blamed for this because they are so busy with their studies. But this is where our digital wall can play such a vital role in keeping them informed and up to date on issues that matter in business, and create important context for everything they are learning in the classroom.”

Corbett felt it was essential to incorporate input for the wall from the students themselves, in addition to his discussions with Limayem and fellow businessman and philanthropist Les Muma. “They’re so busy and have so many things going on in their lives and, frankly, they’re accustomed to a rapid exchange of information from social media,” he says. “I thought it was really important for the kids to feel invested in this. They have the freedom to make tweaks or improvements, and that makes this project especially exciting.”

He and wife Cornelia Corbett have had their hands in many projects, including owning the Tampa Bay Rowdies (Dick with an investment group in 1985 and Cornelia as sole owner from 1986-93). Years later, in 2011, the couple named USF’s soccer stadium with a $1.5 million gift. Corbett also developed Tampa’s mega-popular International Plaza shopping mall.

“When I was planning that, most people told me it would never work, but I sat back and dreamed about how to make it happen,” he says. “So many of our students are dreaming of how they’ll make an impact, and I hope this wall will help them on whatever path they choose. It allows them to be instantaneously in Washington, Asia, anywhere.”

All thanks to Corbett’s window on the world.

Give to Muma COB Operating Fund