/ Why Give / Who you Help / Legacy of a Lost Daughter

Legacy of Love for A Lost Daughter 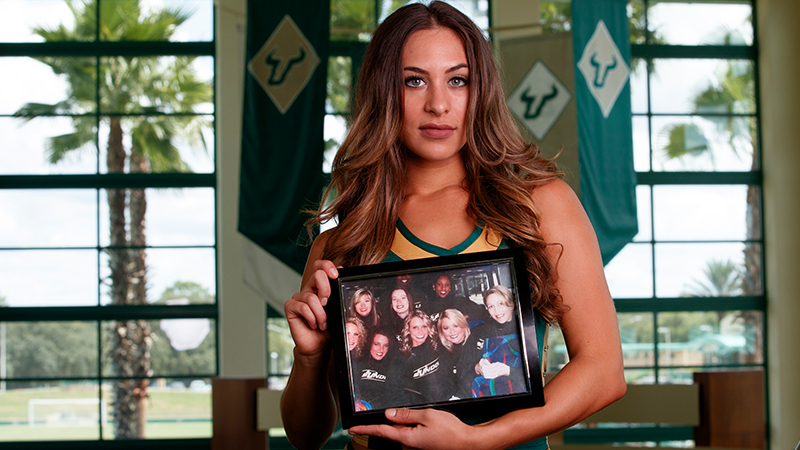 From the start, Jean and Johnny Still knew there was no holding back their energetic baby girl and youngest of three children, Caroline. Even with the leg braces she had to wear as a 3-year-old, to correct a bone curvature problem in her tiny legs, the toddler displayed an irrepressible, upbeat attitude growing up in the family’s hometown of Oxford, Miss.

“She was always such a determined little girl,” says Jean. “She was the spark of the family.”

Her boundless spirit burst forth in new ways when she shed the braces, leading her first into competitive gymnastics at a local activity center and then to her passion for dance. And it would eventually light up the lives of so many young women at the University of South Florida, where she served four years as coach of the Bulls football and basketball premiere dance team, the SunDolls.

With her future full of promise, Caroline Still Wiren passed away unexpectedly at age 34 from complications during childbirth. On a mournful day in May 2007, family and friends gathered in Oxford to say their goodbyes. A dozen devastated SunDolls – many of whom had looked at her as a second mom – arrived at the funeral on a bus from Tampa. “It was a long drive for them, but it meant so much to us that the university arranged to get them there,” Jean says.

As further evidence of how much Caroline meant to USF Athletics, the then Bulls head football coach and former athletic director even made the trip. “That was so kind of them,” she adds. “It’s been nine years now, and Caroline is never out of our thoughts.”

Jean and Johnny have helped keep their daughter’s memory alive in the thoughts of many at USF by creating and endowing the Caroline Still Wiren Memorial Scholarship, which annually awards a deserving SunDoll money to help offset the costs of college.

It is a fitting tribute to a woman who taught herself to dance in middle school, eventually going on to excel on the Ole Miss spirit squad, perform with and coach the arena football cheerleaders for the Tampa Bay Storm, before reaching the pinnacle – the NFL – with the Tampa Bay Buccaneers Cheerleaders.

But it was while working as a textbook sales representative that Caroline learned of the SunDolls opening and landed the job that brought her the most joy: shaping young women as dancers and people.

This year’s winner, two-time senior captain Marissa Martinez, learned about Caroline as a sophomore. SunDolls coach Lori Moses was impressed with her leadership and skill and encouraged her to look into the scholarship. While researching the mandatory application essay, Martinez developed a deep sense of connection to Caroline. “I read all about her, and even though I never met her, I felt a bond because I’ve been dancing since I was a little girl,” Martinez says. “I understood her level of commitment and dedication as a performer, and was so impressed with everything she’d done in her career and at USF.”

“She really brought the girls to the next level,” Moses adds. “I still keep her posters and her calendars in our office, as a reminder of all she did for us.” In addition, the coach has brought in former SunDolls whom Caroline had coached to help run auditions and choreograph new routines.

“She loved those girls,” her mother Jean adds quietly. “She was so happy at the end of her life and that makes us feel good. And so does this scholarship, because we know this is what Caroline would want.”

The scholarship keeps a SunDoll dancing each year with fewer financial burdens – and the enduring spirit of Caroline Still Wiren shining bright.

Give to Caroline Wiren Scholarship