/ Why Give / Who you Help / George W. Jenkins Scholarship

Moving Forward and Giving Back 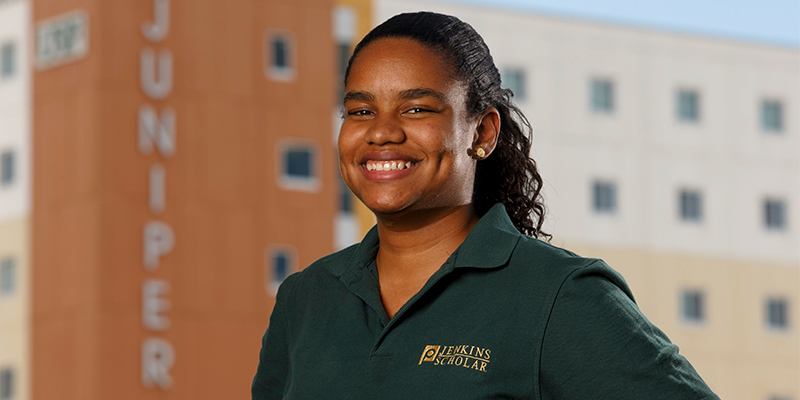 At four years old, Monique Reynolds started dancing – ballet, tap, hip hop, you name it – and was soon competing state to state to pursue her passion.

She dreamed of performing on Broadway, seeing her name in lights, or maybe traveling the world, dancing on stage with renowned musicians and performers.

But by the time she reached ninth grade, those visions were shattered.

“Everything changed when my parents divorced,” she recalls. “Our finances took a big hit. We started moving around a lot in search of new jobs and stability, leaving friends and family behind.”

In the midst of family chaos, Monique put her dance shoes away forever and clung to academics like a lifeline, knowing it was the one thing she could control. With limited financial resources, earning a scholarship was her only hope to attend college. She threw herself into her schoolwork and graduated in the top five percent of her class of nearly 800 students. The hard work paid off.

Today, Monique is a newly minted USF alumna with a bachelor’s degree and a first year graduate student at the USF College of Behavioral and Community Sciences, studying rehabilitation and mental health counseling. She credits the George W. Jenkins Scholarship for giving her a new life, free of debt and full of opportunity.

George Jenkins, or “Mr. George” as he is fondly remembered, was the founder of Publix Super Markets and believed in hard work and philanthropic giving.

“Creating this scholarship was something that Mr. George wanted to do for a long time,” says Kelly Williams-Puccio, executive director of Publix Super Markets Charities. “He wanted the scholarship to go to students who had the heart and the drive, but needed the opportunity to succeed. Carol and Barney Barnett, Mr. George’s daughter and son-in-law, were determined to fulfill his vision and now this program is very near and dear to their hearts.”

Under their leadership, Publix Super Markets Charities launched the scholarship at USF in 1994, eventually expanding to include three other schools in the Florida-Georgia area. The George W. Jenkins Scholarship offers students a “full ride” to college and covers all costs associated with attending school, including tuition, books, housing, medical insurance and living expenses.

“When I found out that I was selected to be a Jenkins Scholar, I remember literally feeling a huge weight lifted off of my shoulders,” says Monique. “It was a very emotional moment – to know I was actually going to college – but I didn’t truly understand the magnitude or depth of the scholarship until I came to USF and saw how well I was provided for.”

As a Jenkins Scholar at USF, Monique lived in the Honors Living Learning Community on campus, surrounded by high-achieving and motivated students. She received a laptop, generous school and living stipends and private tutoring catered to her schedule.

“In addition to their academic success, our Jenkins Scholars are encouraged to give back to their community by participating in community-service projects and service trips funded by Publix Charities,” says Williams-Puccio. “Before graduating, each Jenkins Scholar will have positively impacted the lives of many individuals, a focus we are sure they will continue for the rest of their lives.”

Monique completed two service trips abroad during her time as a Jenkins Scholar, and as each experience opened her eyes to new levels of poverty, she returned home with a fresh resolve: to make the most of the opportunities she earned and give back whenever she could. She’s starting that mission here at USF by serving as a graduate assistant for the Honors Living Learning Community and mentoring the next generation of students.

“I’ve realized being a Jenkins Scholar and a college student is nothing to boast about – all of it is a gift from God,” says Monique. “I am so thankful to Mr. George and the Barnett family for the opportunities I’ve been given.”

Give to Jenkins Scholarship