/ Why Give / Who you Help / Helping the Music Live On

And the Music Never Stopped 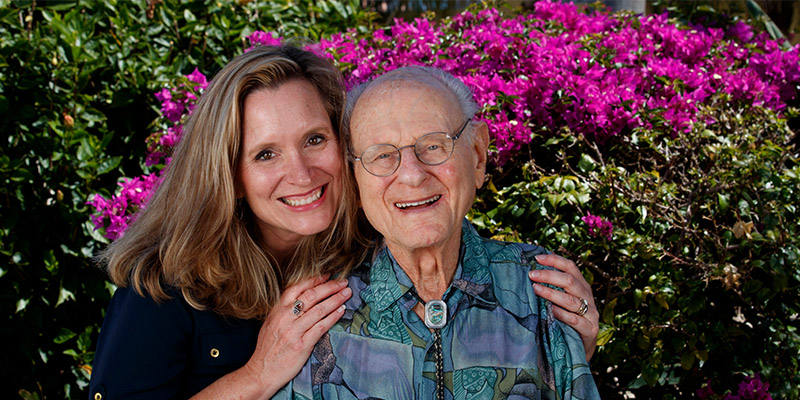 Classical music flows through Ernie Kretzmer’s warmly furnished waterside home in Sarasota like the air he breathes. Tucked in a peaceful nook beyond the bustling shops of St. Armands Circle, the house has radios in every room – from well-worn portable transistor models to modern components to a special hook-up that triggers compositions from the genre’s greats whenever his garage door opens.

“I counted 19 of them,” Kretzmer says in a soft voice, his 92-year-old eyes sparkling through wire-rimmed glasses at the sheer size of the diverse collection.

The ageless works of the masters, broadcast around the clock on WUSF’s classical station WSMR, comprise the soundtrack of a quiet yet extraordinary life. They connect through the decades to a young boy in Nazi Germany comforted during thunderstorms at night by his father playing violin pieces from Mozart, Schubert and Beethoven and other legends, and his mother’s gentle duet notes on the piano.

They reach back to the tiny radio he would often hide under the covers in bed near Cologne, pretending to sleep while instead listening to the calming masterpieces broadcast from major European cities. They accompany his move to America, the doctorate he earned in electrical engineering from prestigious M.I.T. and an impressive 34-year career at Bell Laboratories, inventing numerous devices related to electronic sound wave and data transmission.

And they lead today to a landmark gift Kretzmer has given WUSF Public Media to name Classical WSMR’s master control studio. While undisclosed, the amount will make a profound impact on the region’s only completely classical music station, which serves as a portal to the arts, and features more than 30 performances each year from the studios at USF Tampa and USF Sarasota-Manatee. “I want the station to succeed in the future, and for people to appreciate radio, which is somewhat of a dying art,” he says, his words tinged with the accent of his home country. “I want to keep it alive.”

WUSF general manager JoAnn Urofsky explains that Kretzmer’s gift will allow the station, still in its relative infancy, to flourish in maturity. “It will help set us on firm financial footing, so that we can plan for a robust future serving the community with classical music,” she says. “And it will ensure that our music will touch people’s lives for years to come.”

Specifically, she notes, Kretzmer’s investment will provide much-needed support – beyond funds raised during annual campaigns – to stage more live performances, enhance partnerships with local arts and cultural organizations, promote opportunities for students to learn about classical music, and motivate others to give as well.

“This gift takes the station from existing to thriving,” Urofsky adds. “And that’s what we will remember Ernie for – that he made the difference.”

Ernie and his late wife Alisa made the difference for so many organizations in their adopted hometown – starting with a gift to the Sarasota Music Festival in the mid-1980s, then giving across the board to such local arts organizations as the Sarasota Ballet, the Sarasota Orchestra and Sarasota Opera. Their love grew out of heartbreak and a shared passion for the arts. Yet to fully understand its depth, you need to know what transpired before their paths crossed some 35 years ago.

The Kretzmers were like so many German Jews caught up in the rising tide of the Third Reich, yet among the lucky families to escape before it was too late. A friend in England offered a lifeline, vouching for the family and allowing them legal passage to Great Britain in 1939.

A year later, believing their children would have a better future in America, Dr. Eugene Kretzmer and his wife Lilli managed to secure visas in London. And the entire family – including 14-year-old Ernie, his older sister and maternal grandmother –boarded one of the last boats bringing immigrants to the pre-war United States, with British warships providing an escort to fend off German submarines.

Ernie attended high school in New York City, mastering English easily and displaying an unusual aptitude for technical arts – with an ongoing love of radio and tinkering with electronics. After the family relocated to Worcester, Mass., he was eventually accepted at M.I.T., earning his master’s and doctorate there. As a teaching assistant, Kretzmer even invented a pre-transistor device called a phase meter that earned him healthy royalties and ample attention.

He was soon recruited by Bell Labs, moving to New Jersey. And it was there he met his first wife. They had a son and daughter and built a full life together. But sadly, after 27 years of marriage, she succumbed to cancer and died in 1981, leaving Kretzmer with a void that seemed impossible to fill.

That changed on New Year’s Day 1982, when a mutual friend introduced him to a woman who had moved to New Jersey from Israel, Alisa. She had also been recently widowed and they soon fell in love and married, bonded by a common interest in the arts. Kretzmer’s retirement was at hand, and the couple decided to make their new home in Sarasota, which Ernie had once seen described in Time magazine as “a cultural pearl of Florida.”

The rest is Sarasota philanthropic history. They became angels to every major arts organization in the city, avid attendees of multiple events virtually every week – and constant listeners to WUSF’s classical offerings on Ernie’s many radios. “I remember when I first met them early in my career, and how excited they were to tell me that they had been to four live music performances that day,” Urofsky says. “I just remember how genuinely happy they were.”

By then, they were already official members of the station, supporting both radio and TV. They went on to become founding members of Classical WSMR and its 24-hour format in 2010, helping with the creation of the Sarasota Broadcast and Performance Studio on the USF Sarasota-Manatee campus. Ernie began sponsoring matching challenges for WSMR, encouraging listeners to give – a practice he enjoys to this day. The couple even took a station-sponsored classical music cruise and sightseeing trip in Europe, singing sweetly to each other on bus rides between cities. All the while, Ernie and Alisa derived pleasure from making the world a better place through giving.

“They were guided by the tradition of ‘tikkun olam,’ which is Hebrew for ‘repair the world,’ ” says Veronica Brady, senior vice president of the Gulf Coast Community Foundation, the Sarasota-based organization that partnered with the Kretzmers to handle much of their philanthropic efforts. “That spirit of giving back – giving to do good – is central to Ernie. And I’ve had many a donor say to me, ‘I’ve seen Ernie Kretzmer supporting this, I think I will as well.’ I loved to see the joy that Ernie and Alisa had together in their commitment to each other, and that commitment translated to their philanthropy.”

When Alisa grew ill several years ago, Ernie’s commitment to supporting the things she loved – that bonded them as husband and wife – never wavered. He was devastated to lose her in 2015, but channeled his grief into a memorable, deeply meaningful gesture. Working with WUSF Associate Development Director Kathy Jordan, he decided to honor his late wife with the naming of the Ernie and Alisa Kretzmer Studio, a change that will take place pending approval in June from the USF Board of Trustees.

On a recent morning, he stands in his living room reflecting on his life as a Mozart concerto plays in the background. A Feurich grand piano rests in a corner – the same one played by his mother in Germany, and later by Alisa. A nearby shelf holds an array of plaques honoring the Kretzmer’s generosity, including Outstanding Individual Philanthropist from the Southwest branch of the Association of Fundraising Professionals – nominated by five different organizations. Several feet away, a poster board displays dozens of photos of Ernie through the years, with Alisa featured prominently – a 90th birthday gift from his personal assistant. Ernie has kept it in a central spot so it is never far from view. “I never grow tired of looking at it,” he says, smiling.

Her presence is forever a part of him. So, too, are the soothing works that connect his past and present, from childhood fears in Germany to sunset years in Sarasota. They play from morning until night on his radios, keeping the memory of his cherished late wife, and the classical music he loves, living on in timeless harmony.

Give to WSMR-FM Operating Fund