/ Why Give / Who you Help / Best of Both Worlds: Mentoring Jump Starts Student-Athlete Success 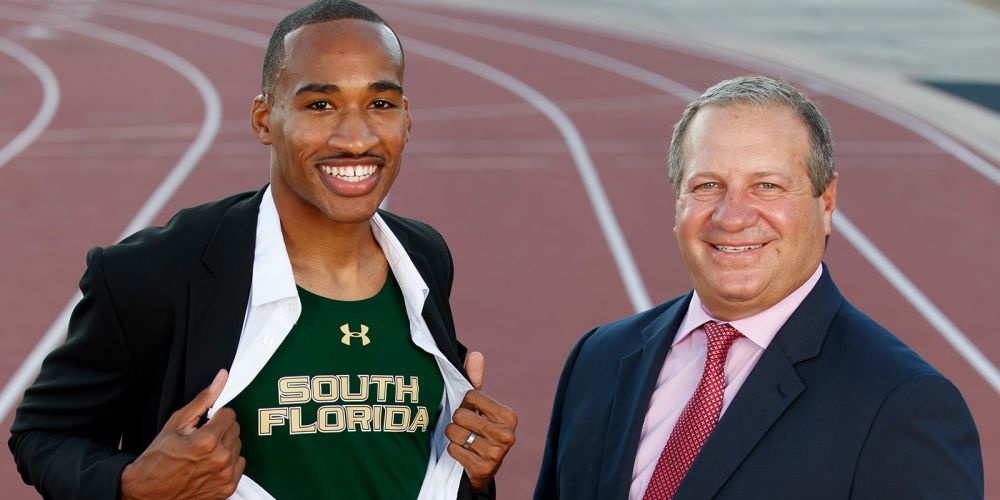 As the late afternoon sun blazes overhead, Matthew O’Neal mentally runs through each step again, locking in his goal. He bounds down the blue runway, energy pumping through him. A literal hop, skip and a jump later, O’Neal soars 53 feet through the air, landing in 8th place in the Triple Jump event at the 2019 USA National Track & Field Outdoor Championships.

The following Monday, O’Neal is beta testing new software as a quality assurance analyst for DXC Technologies. A respected position in his field, flexible time off plan and freedom to work remotely provide the perfect counterbalance to his life as a track and field star.

He’s living the dream — both in his information technology career and as a professional athlete. But, as O’Neal will tell you, he wouldn’t be here without the Selmon Mentoring Institute.

Named in honor of the late Lee Roy Selmon, former Tampa Bay Buccaneers legend and USF athletic director, the USF Selmon Mentoring Institute helps student-athletes transition out of college and into a career. The progressive program begins with a two-credit career development course and culminates with a one-on-one mentoring experience. Since it was founded in 2014, 151 student-athletes have graduated from the program.

“Coming into USF on an athletic scholarship, that’s all you think about — sports, sports, sports,” said O’Neal. “The mentoring institute helped me refocus my mind on what the future holds. Only a small percentage of student-athletes get to play professionally so you need to think about how you can use your degree.”

In the spring of his senior year, O’Neal was paired up with his mentor Andy Hafer, an entrepreneur and business owner who would become his lifelong friend. Hafer took his mentor role seriously, advising O’Neal on his resume, introducing him to professional contacts and upon graduation, recommending O’Neal for the position he now holds.

“Working with DXC is a huge opportunity that most people wouldn’t see right out of college,” said O’Neal. “The Selmon Mentoring Institute and Andy really contributed to my success in an enormous way. I recommend every student take a career class like this.”

That’s pretty much the goal for USF Athletics too — expand the program to be able support more students and endow it so it can stay at USF forever, helping student-athletes reach their highest potential.

To that end, Athletics brought back BullsFest, an annual fundraiser for the Selmon Mentoring Institute. The 2019 BullsFest, presented by R. R. Simmons and backed by the Tampa Bay Buccaneers, was a sell-out event which raised more than $290,000 towards the $4 million endowment goal.

For USF Athletics and the Selmon Mentoring Institute, success isn’t a sprint — it’s a marathon. And just like any sport, no athlete wins alone. The success alumni achieve is not only a result of their hard work, but of the constant and consistent support they received along the way — and the results showcase that success. For O’Neal and the 151 other student-athletes, this victory is the sweetest of all.