/ Why Give / How you Help / Insuring Student Success 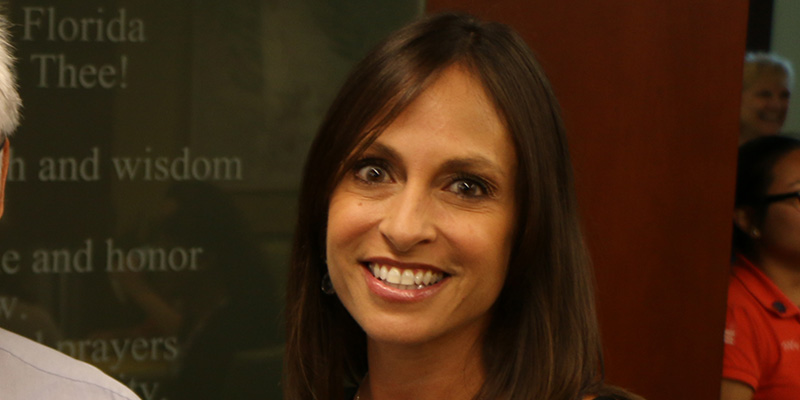 Early in her career, Chris Reyes handled more than her share of raw, emotionally charged situations as an insurance company storm adjuster. Time after time, she was sent by State Farm Mutual into the tumultuous aftermaths of hurricanes, floods and earthquakes, learning to calm frazzled nerves and provide clear, concise guidance to people desperate for answers.

Later, she worked on liability claims, and often found herself in the midst of anguish and tragedy. But Reyes's naturally empathetic nature always helped her navigate the toughest of challenges.

Small wonder, then, that the 1993 University of South Florida business graduate has found a way to parlay her insurance expertise – coupled with a second career in financial planning – into a planned gift for the USF Foundation that came straight from the heart.

And what's significant is that Reyes has made her powerful gesture without the benefit of a personal fortune, but rather with means available to many working professionals who may not know they are in a position to make a profound impact on a student's life.

"You don't have to have a million dollars to put down – you don't even have to have thousands of dollars," she says. "My message is this: For a small amount of money, you can make a big difference."

Reyes has done precisely that utilizing a combination of life insurance and IRA's to set up a Trust that will disperse a sizeable lump sum to the university upon her death, earmarked to help deserving USF students receive an education they might otherwise not be able to afford.

"This is a very cost-effective way to be able to make a difference," she says. "And a lot of middle age people – and younger – don't realize that they can do this."

At USF, Reyes had to pay her own way due to limited family funds Once on campus, she poured herself into studies in the College of Business, while once again finding ways to help others. She joined the Alpha Delta Pi sorority, which stressed the merits of philanthropy and community involvement.

After graduating high school, she joined State Farm Insurance Companies working for a local agent. Later, upon graduation from USF, she joined State Farm Mutual, and logged 180 days of natural disaster duty. After almost a decade of rewarding years, Reyes started a claims consulting business in 1998 and then opened her insurance agency in 2004 where she expanded her role into financial planning. She happened to attend a seminar about utilizing life insurance for endowments – and that sparked her idea of how to help USF.

She listened to a man share a story about his three children, all of whom he had bought life insurance policies for when they were born – money that could one day help them pay for college. Sadly, one of them, a son, was killed by a drunk driver after being accepted by his favorite university.

"His parents set up a scholarship there in his name, using the insurance policy, and that's when a light bulb went off," she says. "I decided that I wanted to leave an endowment for somebody like myself – a first-generation college student who needed help to make their dream of higher education come true."

She did just that while also helping USF in other ways, serving on several committees of Women in Leadership & Philanthropy. And she continues to spread the word about how a small, affordable gift planned in the present can make a world of difference in someone's educational dream in the future.

Give to Muma COB Operating Fund