/ Why Give / How you Help / Giving While Living 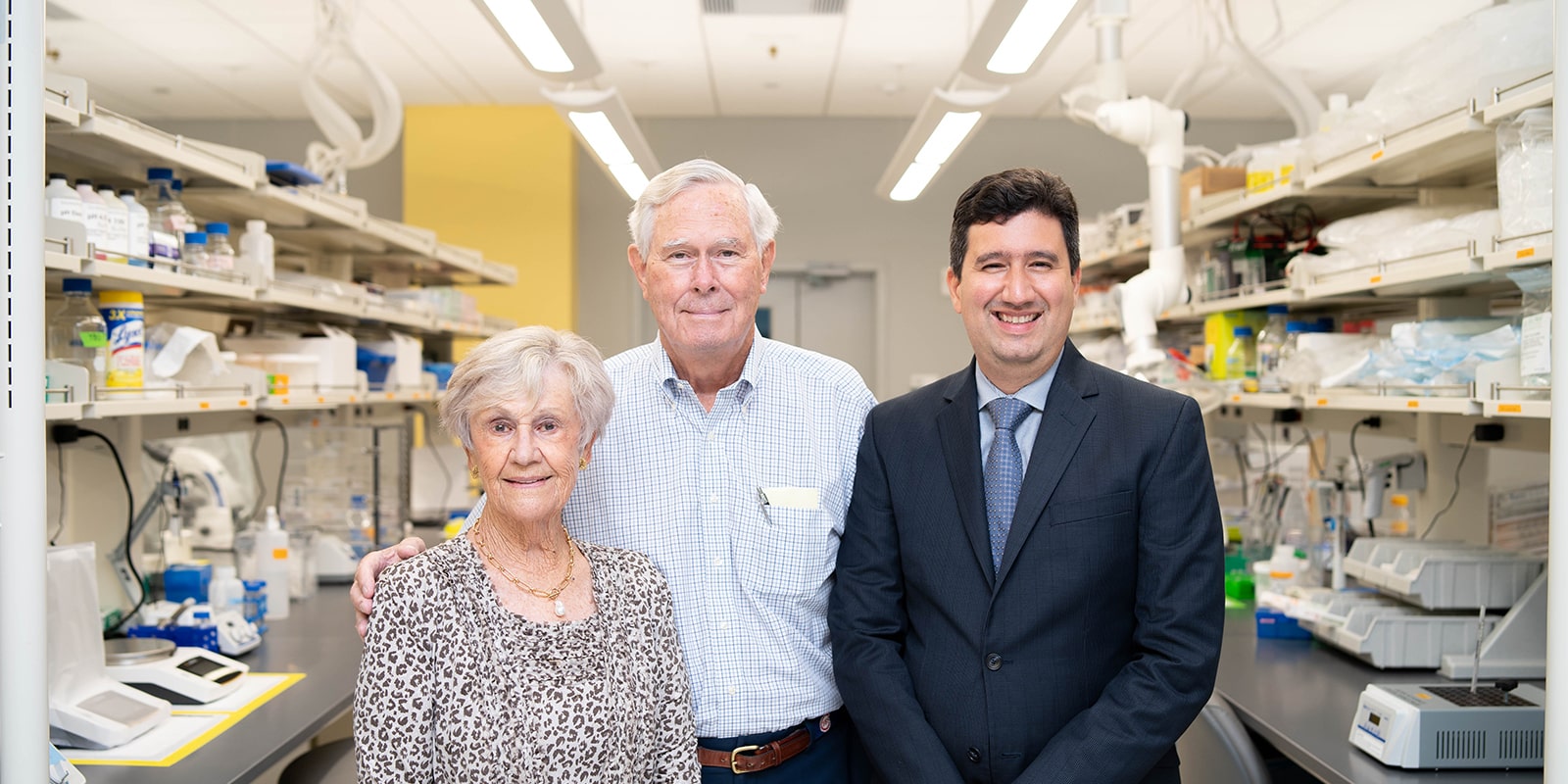 A year ago, Tim Ubben had never set foot on a University of South Florida campus. The national award-winning volunteer and retired founder of the investment firm Lincoln Capital Management lived seasonally in Naples, Florida, where he was a patient of Yale-trained pulmonologist Dr. Jose D. Herazo-Maya.

Diagnosed with pulmonary fibrosis (PF), Ubben wasn't satisfied with the treatments available for patients with his condition. As he began exploring the medical research and clinical trials for PF, he discussed them at length with Herazo, developing a friendship over their common interest in improving care for patients living with severely scarred lungs.

"Pulmonary fibrosis is not what I would call a chosen disease in the sense it doesn't get popular support or much research funding," said Ubben. "The current therapies are six years old with limited value, and the outcomes of the five stage-three clinical trials are unknown and probably won't produce an FDA-approved product in the near future."

Herazo enjoyed his conversations with Ubben, who he described as intellectually curious with an excellent knowledge of medical science. Then, he was approached by USF Health's Division of Pulmonary, Critical Care and Sleep Medicine to serve as its new associate chief of research. The opportunity would allow Herazo to expand the division's research and for him to start his own studies on idiopathic pulmonary fibrosis.

Ubben saw Herazo's move as an opening to make a direct impact on the future of care for PF patients. The philanthropist, who has spent his retirement as a board leader and benefactor of several nonprofit organizations since 1999, said he would help his doctor launch new research on the condition.

Before Herazo’s first day on the job, Ubben had already made a $1 million gift to USF Health.

“I have been discouraged in the lack of progress in alleviating pulmonary fibrosis in patients — that is why I made the gift,” said Ubben. “This funding will support research to better understand and find assistance in the fight against this disease. I probably won’t be around to benefit from the results of Dr. Herazo’s research, but hopefully other pulmonary fibrosis patients will.”

While at Yale, Herazo served on a team that discovered a gene signature in blood that predicted mortality from idiopathic pulmonary fibrosis (IPF). Since he joined USF Health in January, he is already putting Ubben’s gift to work as he outfits the Ubben Family Pulmonary Research Laboratory in the new USF Health Heart Institute space in downtown Tampa. He is building a research team, including other USF physician scientists, biostatisticians, clinical and basic scientists.

“Certain patients with lung scarring can live well for years while others develop disease exacerbations and die quickly from the disease,” said Herazo. His team is currently working to develop a blood test based on gene expression that will help identify patients at risk of severe pulmonary fibrosis before they clinically deteriorate. Since PF is one of the most severe complications of COVID-19, these research outcomes could benefit even more patients.

“We can make a powerful impact when patients and physicians unite to bring big ideas to reality,” said USF President Steve Currall. “This generous gift will help the University of South Florida advance innovative testing and treatment of the toughest cases of devastating lung conditions, ultimately saving lives.”

USF Health’s translational “bench to bedside” approach to medical research should speed the application of discoveries made by physician-scientists, including Herazo, to help patients.

“We are delighted with this confluence of vision, talent and philanthropy,” said Dr. Charles Lockwood, USF Health senior vice president and dean of the Morsani College of Medicine. “The timing of Mr. Ubben’s gift is helping us to rapidly launch this important research to fight devastating lung conditions.”

For Tim Ubben and his wife Sharon, their goal is to make their greatest impact on the world while they’re here to see it.

“For Sharon and I, we believe in giving while living,” said Ubben. “We hope to exhaust our resources for the purpose of bettering mankind in some way by the time we pass away.”

Beneath Ubben’s serious commitment belies a humble sense of humor. “While it probably won’t happen this way, we would love it if the last check we wrote was to an undertaker … and it bounced.”