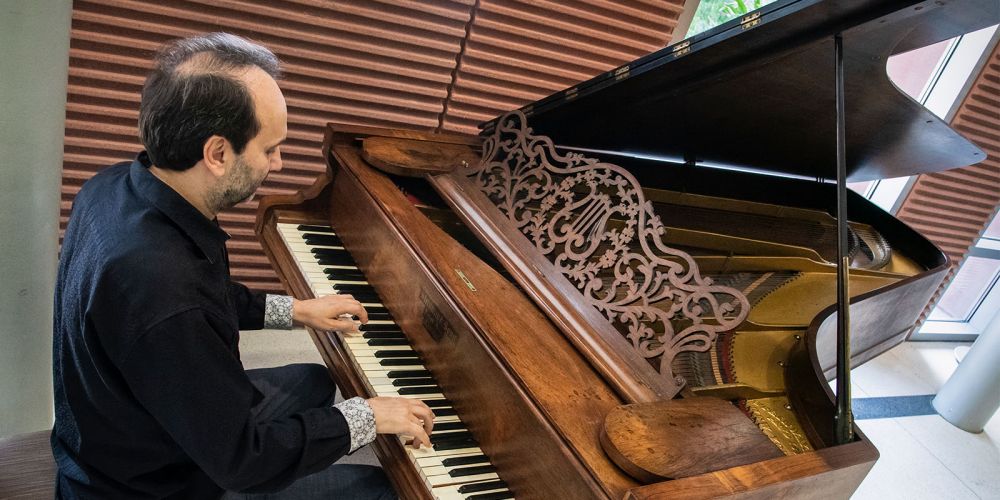 The distinguished Steinway Piano collection in the University of South Florida’s College of The Arts has a new addition that is nearly as old as the 19th-century piano manufacturer itself.

As a point of historic context, in 1861 Abraham Lincoln had just become the 16th president of the United States, the nation was plunging into the Civil War, and the Steinway & Sons piano company founded by a German immigrant in a Manhattan loft marked its eighth year of existence, setting a new modern standard for the instrument.

USF is a natural home for the venerable Steinway given its distinction of being named an “All Steinway School,” one of just over 100 in the world. The College of The Arts also hosts the Steinway Piano Series, a distinguished event in its 10th season that brings together premier international pianists to perform in the university’s acoustically rich Barness Hall and the larger Concert Hall.

“My family has been the owner and caretaker of this unique Steinway piano for the past four decades,” said Mr. Shah in a written statement issued on behalf of himself and his wife, Ketki Shah. “Our children have taken lessons on it, and it has been the background to countless special moments in our home over this time. It is appropriate now to gift this history to the University of South Florida School of Music, so that others in our community may create future memories alongside of us.”

“This is a great piece of history to add to our wonderful collection of Steinways of all models, including from the factory in Hamburg, Germany,” says Svetozar Ivanov, USF music professor and director of the piano program at USF’s College of The Arts, as well as founder/director of the school’s Steinway Piano Series. “Even though this piano won’t be played, due to its extreme age, it’s very inspiring to have it in our collection as a museum piece, and we are very grateful to the donor, Mr. Shah, for making this possible. As an All Steinway School, it is a great symbol of the company’s distinguished past.”

The special new Steinway will be displayed for anyone at the School of Music to see, but, according to Ivanov, pianos lose their power and resonance after about 20 years. “As a comparison,” he explains, “the Steinways in our collection are all six years old or newer.”

“It’s amazing to see anything that’s still here from 1861 — let alone a piano that is handmade, and comprised of over 12,000 parts,” says Charlie Hunt, one of the owners of the Music Gallery in Clearwater. “Steinway had only been in business since 1853, so in eight short years they had become the world’s finest piano manufacturer. Here it is 165 years later, and Steinway remains the world’s finest piano. It is truly a great American success story.

“When USF moved into their new music building and became an All Steinway School in 2011, they joined an elite group of more than 200 universities that demands the finest pianos, for the finest students. This historic piano will be on display for all to see for many years to come.”

Give to Steinway Piano Series