/ Why Give / How you Help / Changing Lives Through Music 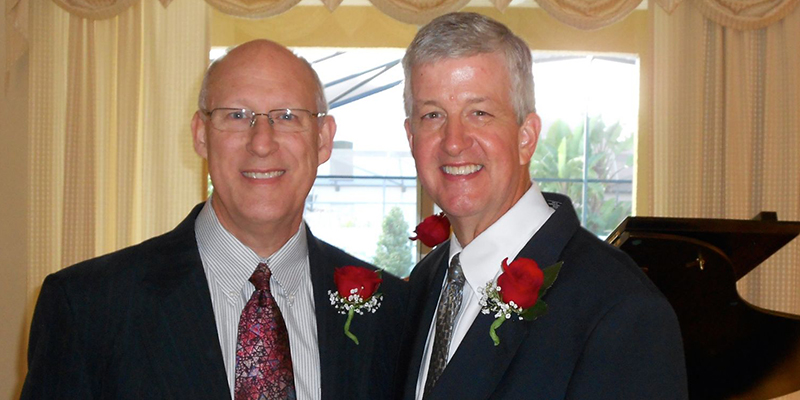 When speaking with Steve Fessler and Randy Lord, it’s hard not to smile. They laugh often, speak kindly and are quite simply…happy.

Together for more than 33 years, the retired music instructor/conductor and litigation attorney now spend much of their time focused on philanthropy. Recently, they established the Steve Fessler and Randy Lord graduate assistantship at USF’s School of Music, which will be enhanced with a gift from their estate.

“Our gift is to help serious music students graduate from USF with as few debts as possible,” commented Steve, a 1977 graduate of USF’s School of Music and someone who knows firsthand the financial difficulties many students face. As a Vocal Performance major at USF, he received a $72.50 scholarship every fall for the four years he was in attendance. The scholarship was arranged for him by longtime USF Professor Emeritus of Choral Conducting, Dr. Robert Summer.

“It doesn’t seem like much now, but it was significant enough that I remember it all these years later,” commented Steve, who remains grateful to Dr. Summer for also helping him secure a job as the choral director at Lake Magdalene United Methodist Church in Tampa to help him make ends meet.

Although, after nearly 40 years, Dr. Summer does not specifically remember the help he offered Steve, he does recall him fondly. “He was a standout student,” commented Dr. Summer. “He was well liked by his peers; he had an outgoing personality and was a very talented singer.”

It was a talent that quickly earned him a spot as a tenor soloist with the famed Norman Luboff choir within three weeks of his graduation from USF.

“The Norman Luboff choir was very popular at the time,” continued Dr. Summer. “They only accepted around 25 singers, and to be invited to tour with them was a real testament to his talent.”

After his stint with the choir, he settled in New York City where he and Randy first met while both were auditioning as stage actors.

“I don’t recall that either of us got the part, but we didn't care,” commented Steve. “We landed a show of a lifetime with each other!” In fact, it’s a “show” that has run more than 30 years now and recently culminated in marriage.

For nearly a decade, the two performed in various Broadway touring shows, maintaining a grueling travel schedule. By Steve’s count, he visited 48 states and eight countries.

Eventually, the rigors of the road took its toll on both of them, and they returned to school in search of more stable careers. They attended the University of Florida, where Steve did graduate studies in conducting and music education and Randy graduated first in his class from UF College of Law.

Steve spent much of his career as a music teacher and choral conductor at various schools throughout the Tampa bay area, including as an adjunct professor in musical theater at USF, while Randy practiced law at two large law firms in Tampa. In 1996, Steve and Randy joined Walt Disney World Co. in Orlando, where Randy became their in-house litigation counsel and Steve accepted a position as an entertainment and production stage manager. In 2000, Randy left Disney and became a partner at one of the nation’s largest labor and employment law firms before they both retired while in their early 50s.

Since retiring, the two have filled their time by caring for elderly family members, and giving to causes important to them both, such as helping young people with a passion for music to become successful.

“Young musicians struggle to stay in the music business if they are tied down by large debt, often having to take other jobs to survive,” commented Steve. “Our gift to the USF School of Music is to encourage greater success and have a positive impact on the lives of future USF music graduate and doctoral students.”

The couple has made a similar gift to Randy’s alma mater, the University of Maryland.

“In our philosophy of giving, it’s important that our gifts go directly to where there is a specific need, and by establishing an endowed assistantship in music we are able to do that in a manner that we are both passionate about,” commented Randy.

“I have a lot to repay to USF,” said Steve. “It created a wonderful life for me.”

Give to Fessler & Lord Music Fund

Our students contribute energy, curiosity and enthusiasm to our campus environment.