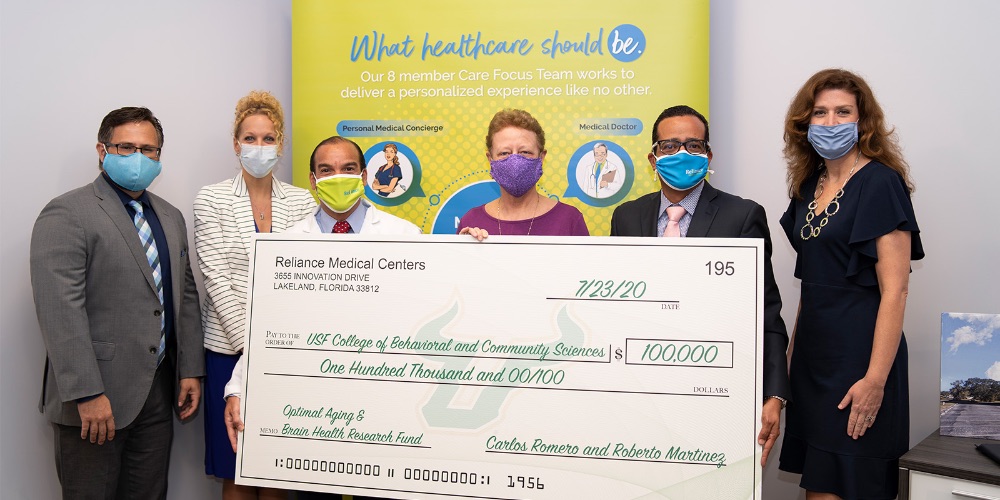 Reliance Medical Centers was founded on the idea that health care should be an enjoyable experience.

“If we don’t see you, we can’t treat you. We can’t keep you healthy. So if you don’t want to come, that’s not going to help,” said Roberto Martinez, co-founder and co-CEO of Reliance, which has locations in Lakeland and Winter Haven, Florida.

Focusing on seniors, Reliance looks for ways to help older adults overcome common barriers to wellness and receive the care they need, in a thoughtful and attentive way.

Each patient at Reliance, for instance, is assigned a medical concierge, who schedules medical appointments, arranges for transportation and checks in with the patient before and after visits. Similarly, a patient navigator assists with coordinating patients’ insurance benefits.

Outside of traditional medical appointments, Reliance offers an on-site Wellness Club, including a hair and nail salon, massage therapy, an activity center, a fitness center and more.

“Some people might think it’s frivolity,” said Martinez. “It’s not, because you’d be surprised how many people have to choose between getting a haircut or paying the copay for their prescription.”

“Learning is part of our philosophy. It’s ingrained in Reliance,” said Martinez. “It’s an ongoing evolution finding opportunities to improve what we do.”

So when Martinez and his co-founder, Dr. Carlos Romero, met Aryn Bush, PhD, a research assistant professor at USF, and Jennifer Lister, PhD, associate dean in USF’s College of Behavioral and Community Sciences and professor in the Department of Communication Sciences and Disorders, and began learning of their brain health research, they identified it as something they wanted to incorporate into Reliance.

For more than 10 years, Bush and Lister have researched ways of detecting cognitive impairments, such as Alzheimer’s and dementia, in the earliest stages when treatments can prevent or delay decline.

“If cognitive impairment is not identified early, then it is too late for many treatments,” explained Lister. “Once a caregiver starts noticing signs, the disease has already progressed. Early signs often manifest in the sensory realm, such as in hearing, vision, smell and gait.”

As an audiologist, Lister has studied brainwaves in relation to sound using EEG measures and behavioral measures such as the presentation of sounds in difficult environments, which mimic real-life situations, where background noise or someone’s accent may detract from understanding. Her research has shown that changes in hearing predict changes in cognition.

Moreover, Lister and Bush highlight the importance of speech patterns in older adults, with the decline in speech serving as yet another indicator of cognitive decline. Through her work at Reliance, Bush explained that an alarming 25 percent of the patients she is seeing have untreated hearing loss. A significant body of research provides evidence of a relationship between hearing and cognition. Armed with the knowledge that hearing loss is in fact treatable, there is the hope that early intervention will positively impact brain health and potentially reduce dementia risk.

Bush asserts the importance of a “proactive, preventative not reactive, in crisis” approach, which Reliance passionately follows. Not too long ago, many people felt there was little they could do to stop Alzheimer’s disease or further cognitive decline, but the current literature offers hope for prevention — diseases are brewing beneath the surface many years prior to symptom onset and that is when preventive efforts to reduce dementia risk should begin.

Recognizing the invaluable nature of Bush and Lister’s work, as well as their research and passion regarding healthy aging and prevention, Reliance Medical Centers recently gave $100,000 as the founding donors of the Optimal Aging and Brain Health Fund at USF College of Behavioral and Community Sciences (CBCS).

In addition to the financial gift, Reliance has provided ample space for research facilities at both of their locations, built to Bush and Lister’s specifications.

At Reliance, the relationship between care and research is fluid.

“We are translating the knowledge we have gained from science to the population we are trying our best to serve,” explained Bush. “Simultaneously, the research being conducted at Reliance informs the knowledge base, which is beautiful.”

The relationship is cyclical — the doctors and care team help the patients, and the patients help them.

“We’ve started to narrow it down to a few things that really do seem to be early indicators,” said Lister. “The exciting part is, through this partnership, we can translate that into screenings and treatments.”

Over the last few months, Bush and Lister have started conducting brain health screenings at Reliance and exploring ways to treat those exhibiting early symptoms of cognitive impairment. According to Bush, there are no Alzheimer’s or dementia prevention trials in Polk County, so basing their work at Reliance’s locations in Lakeland and Winter Haven provides access for the older adult population in the area.

“This investment will enable us to meet the needs of people who really desperately need it,” she said.

In the long run, Romero envisions patients staying healthier and independent for longer, thanks to better cognitive function. “All in all, this is one of the greatest things that has happened to us, embedding that into our care model,” said Romero.

For USF, there is also potential for students in CBCS to gain hands-on experience assisting with research at Reliance as it unfolds.

“We’re very excited that USF has taken that approach and is being innovative, or thinking out of the box with us,” said Martinez.

The feeling is mutual.

“Providing these interventions is critical,” said Bush. “That is exactly why it’s such a pleasure and joy to be a part of Reliance. So, thank you for the relationship.”