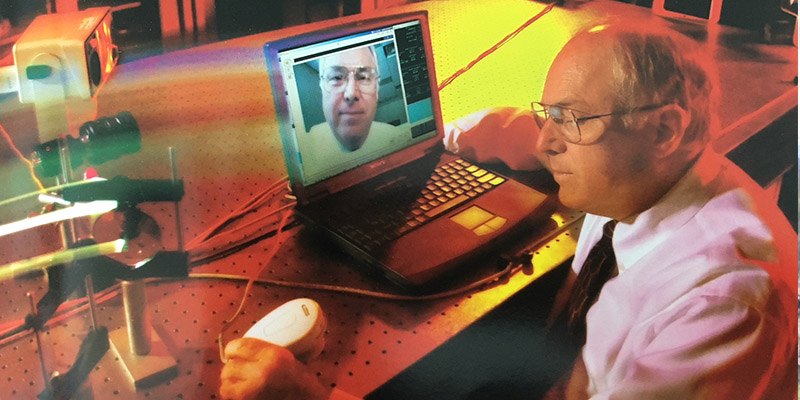 There were several reasons why Dr. Dennis Killinger, an international expert in laser technology, left a distinguished research job in New England 30 years ago to join the physics faculty of the University of South Florida. You might be surprised by one of them: the circus.

It’s not that Killinger was a devotee of trapeze artists or juggling clowns under the Ringling Bros. and Barnum & Bailey big top. On the contrary, he was busy beginning a distinguished half-century career as a leader in the use of beams – and not the kind needed for high-wire balancing. His work for MIT’s prestigious Lincoln Laboratory involved laser remote sensing of the atmosphere: sending a laser beam out the window to study how it interacted with distant gasses and measuring the concentration of carbon dioxide.

But by 1987, after a decade at MIT, Killinger and wife Rose – who met and fell in love at the University of Iowa – began to ponder a move with their two young children. Killinger had gotten the bug to teach at the college level, and soon had offers from such institutions as the University of Maryland, Illinois and an up-and-coming school that got his attention, the University of South Florida.

“At the time, I looked at USF as a growth stock, as opposed to a blue-chip stock, because it was really committed to high-quality teaching,” he recalls. “They called it ‘Harvard on the Hillsborough,’ and many high-ranking liberal arts professors from Ivy League colleges had come there. It was starting to really  emphasize research, bringing in senior people and scientists. That was a big attraction for me.”

What tipped the balance to the Bulls, however, was somewhat related to the laser-sharp band accompanying all the comedic and death-defying acts in the legendary show headquartered in Sarasota.

“We had a lot of relatives in the Sarasota area with ties to the circus,” Killinger explains. “We had two aunts and uncles who lived down here, and so did my brother. They were all musicians and helped direct the Ringling circus band. And that was kind of the extra draw to move to Florida and take the job at USF.”

So, thanks to a little helping hand from P.T. Barnum and John Ringling, USF landed an outstanding professor and researcher who enjoyed a long and renowned run in USF’s physics department. And now, the Killingers are giving back to the university that has given them so much. With the help of USF’s Office of Gift Planning, Dennis has utilized a tax-free distribution from his IRA to support one of Rose’s pet projects with the long-standing, charity-oriented USF Women’s Club.

A little background is in order. Soon after the Killingers arrived in Tampa, Rose joined the Women’s Club – the very first club on campus, eventually serving as president several times and currently as vice president. Founded by Grace Allen, whose husband was USF’s first president, John Allen, the social organization was made up primarily of professors’ wives. They held fundraisers and auctions to support the students. “At the beginning, we started with a little book scholarship,” Rose recalls. “We put our money together and came up with $100.”

Over the years, however, the club has built an endowment that now totals $300,000, awarding $10,000 in scholarships every year. They also continue to take on an array of pursuits, and one of those is modernizing the Grace Allen Room of the USF Library on the Tampa campus, which hosts lectures and events. That’s where the IRA came in. Now retired, Dennis recently took advantage of IRS rules, allowing tax-free distributions directly to a qualified charity of IRA investments beginning at age 70-½. The upshot: the couple recently made a gift of $500 that will go toward a much-needed upgrade of the room’s AV gear.

“All gifts are important to us in any shape or size, and we’re very grateful to Dennis and Rose for their support – they’re wonderful, down-to-earth people who’ve truly made a difference to USF over the years,” says USF Foundation Assistant Vice President of Development-Gift Planning Marion Yongue. “One of the significant aspects of their gesture is that it utilizes an IRA to make a charitable gift. That’s such an efficient and effective way to increase impact.”

Killinger made an impact at USF in many ways over the years. He served as director of the Lidar Remote Sensing Laboratory

in the College of Arts and Sciences. In that capacity, his work was known nationally and around the world in an array of complex specialties, with such head-spinning names as laser and remote optical sensing, laser-radar/Lidar, applied spectroscopy, laser physics and Free Space Optical laser communication. His work began in a small physics lab, but gradually expanded to the planetarium.

“We renovated the whole place and turned it into a laser remote sensing or Lidar lab – which combines lasers and radar,” he explains. The laser technique they developed for measuring CO2 in the atmosphere is used today by both the National Oceanic and Atmospheric Administration and NASA.”

They also developed a method of sensing organics and plastic substances in bottled water, working closely with the faculty of the College of Marine Science on the campus of USF St. Petersburg. That discovery grew out of a project that allowed them to see underwater mines and submarines with 1,000 times greater sensitivity than in the past, which, ironically, proved too sensitive to use. “But then we applied it to drinking water, and we were able to monitor the amount of BPA plasticizers that had leeched into the bottled water,” he says.

Due to his expertise in Lidar technology, the state of Florida soon asked for Killinger’s assistance with a laser-radar system to catch speeders. “We helped them rewrite the laws in Florida to allow police to use laser radar, and started the first state-sanctioned laser radar testing lab. That is what they utilize today to look at speeding vehicles,” he says.

Along the way, Killinger accumulated nine patents, and helped create and license software allowing the prediction of laser-beam transmission through the atmosphere. “The software is used worldwide in lidar and laser remote sensing applications. ” he says. He loved teaching classes in modern physics, general physics and graduate-level quantum physics. But today he savors retirement as a Distinguished University Professor Emeritus, but still remains semi-active at USF mentoring students, writing papers, and serving on a few committees.

Next year, Dennis and Rose will mark their 50th wedding anniversary. After marrying in 1969, they each attended the University of Michigan, where Rose earned her master’s degree in social work. She eventually started a home-based business placing caregivers in the area with elderly seniors before retiring with Dennis in 2010. She still stays busy with the USF Women’s Club, which is always looking to grow its membership and continue supporting USF (see their page on Facebook or usfwomensclub.com for more information). Meanwhile, the Killingers have traveled Europe and Asia, taken an array of cruises, and spent plenty of time visiting their children and grandchildren.

The Ringling Bros. and Barnum & Bailey circus may have finally folded its tent. But when it comes to the Killingers helping USF – this time with a gesture that wasn’t the least bit taxing – the show goes on. 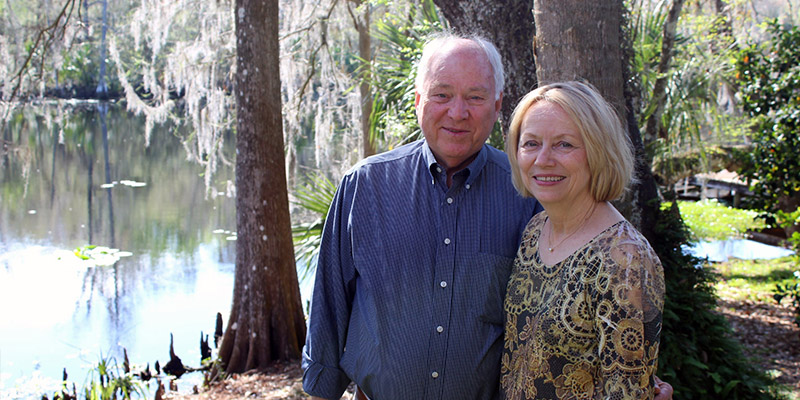 Dennis and Rose in the back yard of their home by the Hillsborough River – and near so many USF memories.